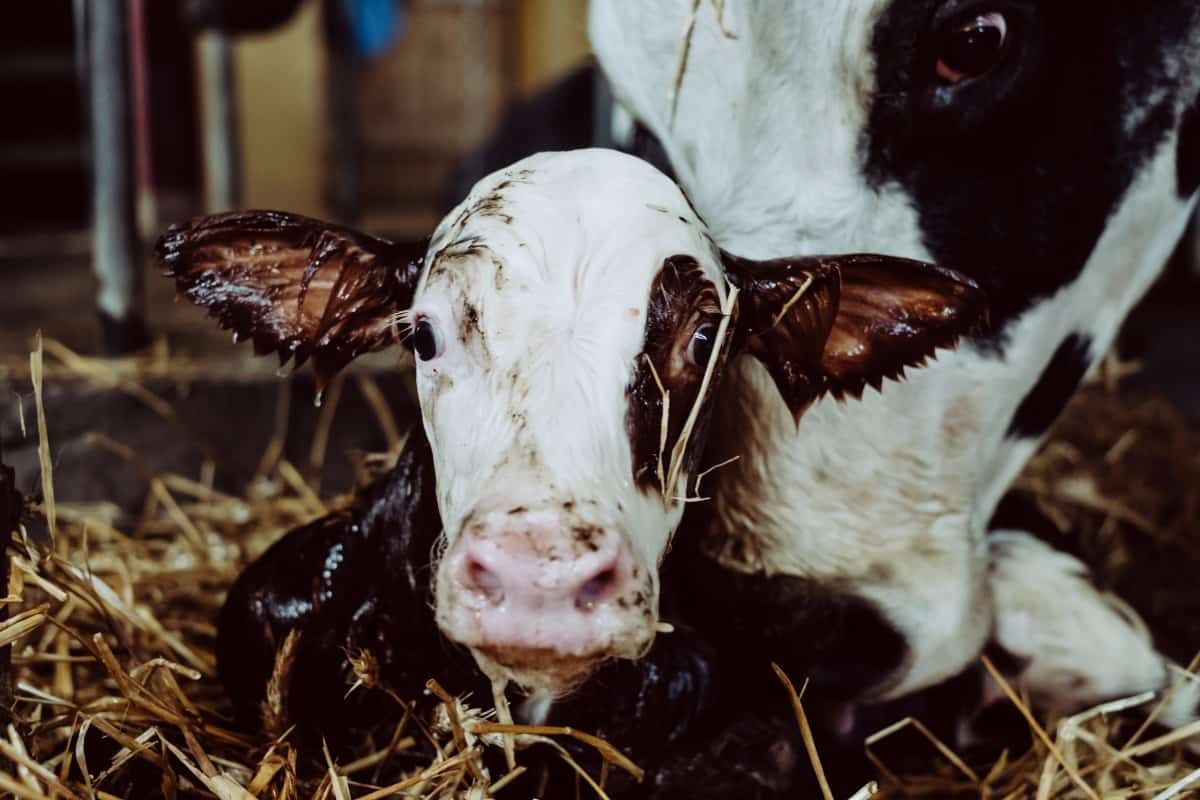 On dairy farms, calves are typically separated from their mothers within 24 hours of birth. On beef farms, it often happens later, after a few months. From an emotional perspective, many people wonder how this affects the cows. Do cows miss their calves?

In this post, I’ll address some of the dairy industry’s talking points on this question. I’ll also share links to many videos showing footage of cows mourning their babies. And I’ll share the results of a study that tested how maternal separation affects calves later in life.

Do Cows Feel Sad About Losing Their Calves?

If you ask a dairy farmer about this issue, they’ll insist that cows are very different from people. They might say that mother cows “barely even notice” their baby being taken away.

Sometimes dairy farmers will admit oxytocin hormones may make the mother cry out for her baby… but that’s just hormones. I kid you not—one dairy farmer explained it this way:

“The oxytocin surge a new momma has can make her a bit crazy.”

That’s a pretty convenient way to dismiss a mother’s sadness. Just call her “crazy” due to hormones. Of course, this would be viewed as insane if you were talking about a human mother.

It’s likely that all feelings of love are associated with oxytocin, whether in cows or humans. That doesn’t make them less valid or powerful for the individual experiencing them. More evidence coming below that cows are emotionally affected by losing their calves.

For most of this post, I’ll be looking at mother-calf separation on dairy farms. However, I want to contrast dairy farming with beef farming to make a point.

While dairy farms typically separate mother and calf within hours or days, it can be a few months on beef farms. One source explains how this separation typically goes:

“Calves stay with mom until weaning day, from three to eight months. … Calves are physically separated from mom, and both spend a few days searching for one another. It’s a difficult time, and Oregon State University Extension recommends vaccinating calves three to four weeks before weaning to help decrease weaning stress to the immune system.” (source)

“Both spend a few days searching for each other.” Does that line up with what the dairy farmers say, about how mother cows “don’t even notice” when you take away their baby?

Here’s another account from a beef farmer about the mother-calf separation:

“When the beef calves are separated, they know something is different, and they miss their moms. They’ll talk all about it—to anyone within earshot. And the moms talk back. So it’s pretty noisy.”

I understand the mother-calf bond may be something that strengthens with longer exposure to each other… So maybe there is less sadness when they’re separated immediately.

But the fact is that cows do naturally bond with their calves. And many of them are very sad when their calves are taken away.

Why Are Calves Separated From Their Mothers?

There are a number of reasons cited by dairy farmers about why calves are taken away from their mothers. Most of them amount to something like: “It’s for the health and safety of the calf.”

Supposedly, there are various bad situations that can arise when the calf is allowed to stay with its mother. For example, the calf might get accidentally trampled by the mother. Or the calf may eat the mother’s feces and get sick.

According to dairy farmers, the quality of colostrum produced by each cow can also vary substantially. By separating the calf, farmers can ensure that enough colostrum is administered to every calf. This helps with immunity for the calf. (source)

Whether or not these problems are actually common, it makes sense that a calf’s health and safety can be more predictably controlled if its separated.

From a business perspective, sad cows aren’t a problem—but sick or hurt cows are a problem. So it makes sense that the emotions of mother and calf are not a big factor, while making newborn care repeatable and predictable is a priority.

Another obvious reason why baby calves are separated from their mothers: It maximizes the amount of milk that can be “milked” from the mother. (Meanwhile the calf is fed milk-replacer or a smaller amount of milk than they’d naturally drink from mom, which saves money.)

How Long Does a Calf Stay With Its Mother?

On most dairy farms, a calf will only stay with its mother for a few minutes or a few hours. On some farms, it may be a few days, until the mother’s milk no longer contains anti-body rich colostrum.

Do Cows Cry When Their Calves Are Taken Away?

Many cows do cry when their calves are taken away, but not all do. It varies.

I already quoted a couple sources above about how beef calves and cows often call out for each other and search for each other after weaning. But when you actually see video of the mother-calf separation, it’s another level of heartbreak.

Here are some videos of mother-calf separations:

But instead of embedding one of the sad videos here, I want to embed this happy video. It’s a mother cow and baby cow being reunited. This happened due to a rare “rescue” scenario that wouldn’t happen on a dairy farm. Usually, the mother would be left to cry with no reunion.

How Long Do Cows Miss Their Calves?

Many accounts report cows bellowing and crying for their missing calf for 1 to 3 days. However, just because the mom stops audibly crying for her baby, that doesn’t mean she’s forgotten and moved on.

Ultimately, the sadness of a mother cow missing her baby will vary and is impossible to judge from the outside.

How Does Maternal Separation Affect the Calves?

There was a study performed at the University of Veterinary Medicine in Vienna that examined this question. You can read the whole thing here, or just keep reading for a summary.

A group of calves was split into two groups… One group was separated from their mothers immediately after birth. The other group were allowed to stay and bond with mom for five days.

Here’s a quote from the beginning of the study:

“Calves of dairy cows are generally separated from their mothers within the first 24 hours after birth. The majority of the milk thus enters the food market and not the stomachs of the calves. However, growing up without a mother has consequences. Scientists at the Vetmeduni Vienna studied the long-term effects of early maternal deprivation. Their study shows that calves which have contact to their mothers or to other cows during rearing become more sociable adults.” (source)

Of course, you could argue that adult social competence “doesn’t matter” for calves born on dairy farms. After all, most male calves will be sold into veal and won’t even become adults.

But I think it’s still telling that the maternal separation affects calves enough that it makes them less sociable later in life. Couldn’t we infer from this that it’s likely a very sad, traumatizing event to experience during the short lives they do get to have?

A resource about “Veal Calf Care” from the Ohio Dairy Industry Resources Center confirms this: ”Veal calves are a small, but successful portion of the U.S. dairy industry.”

I want to finish this post by responding to another specific comment I saw from a farmer, addressing the question of whether it is “mean” to separate cows from their calves. She said:

“So is it mean to take a calf away from its mom? No, it’s not mean. It is part of life, and part of raising cattle.”

Her argument is that “It is part of life.”

That sounds like an appeal to nature. But in reality, dairy farming is very unnatural. Humans are the only animals that drink another species’ milk, and the only ones to drink milk after infancy, too.

To say “It is part of life” is to excuse yourself from any critical thinking whatsoever. Clearly, dairy farming is not a necessary part of human life. And beef farming isn’t necessary, either.

As a vegan, my thought was never “Can we please get some dairy and beef without mother-calf separation?”

My thought is more like, “Hmmm, dairy and beef seem to inherently, inevitably cause suffering for the animals in those industries. Maybe it’s not worth eating dairy or beef, despite their taste appeal…”