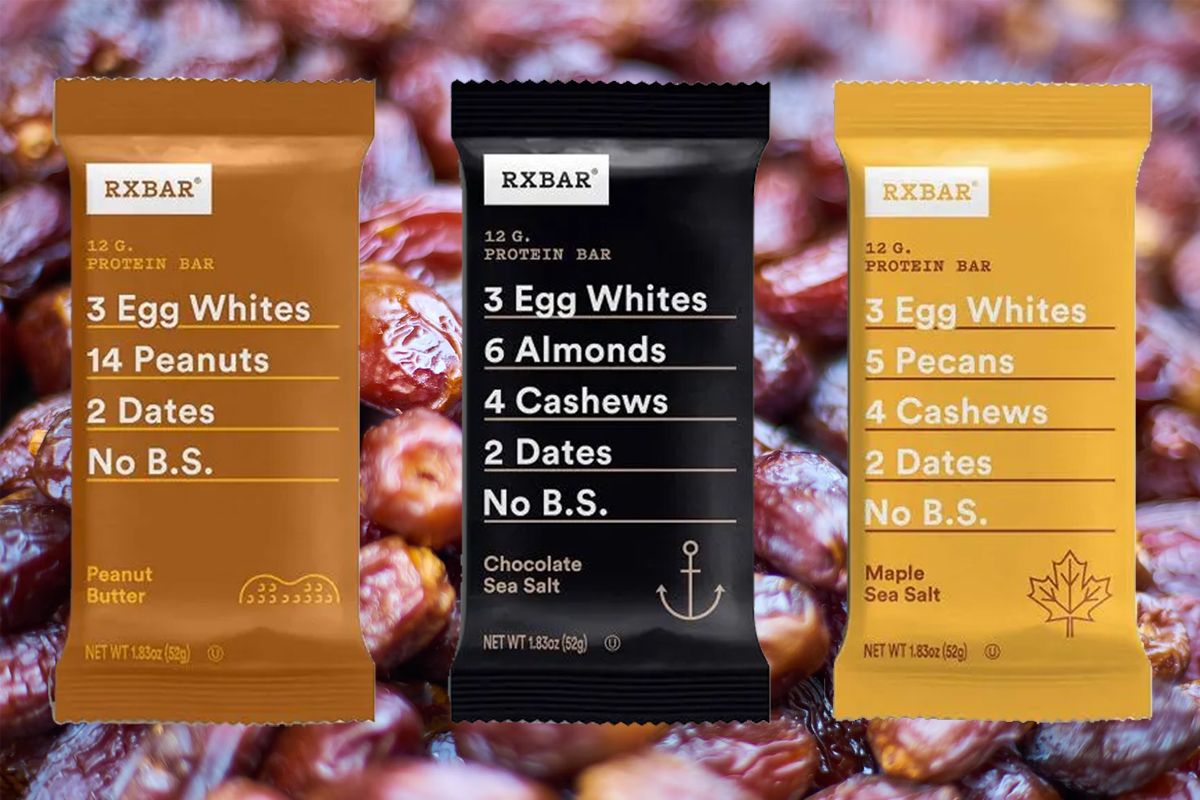 Most protein bars are full of processed ingredients: Vegetable oils, sugar, protein isolate, and more. In contrast, RXBARs list their simple ingredients in big letters on the front of the package. But are these bars actually healthy when you dig into the details?

RXBARs are made primarily of healthy, whole-food ingredients. They are generally free of processed oil, sugar, and flour. However, RXBARs still have around 13g to 18g of total sugar per bar (from dates) and up to 310mg of sodium per bar. So they may not be compatible with everyone’s health goals.

Below, we’ll dig into the ingredients of three popular RXBAR flavors. We’ll look at the sugar, sodium, and fiber content, and we’ll explore whether they’re “processed,” if they’re good for weight loss, and more.

Are RXBARs Good for You?

Here are the 8 main questions I’ll be answering about RXBARs. Click to skip to any section—or just keep reading below:

1. What Are RXBARs Made Of?

Let’s start by looking at some RXBAR ingredients. Here is a table with three flavors, but the ingredients are pretty similar. I’ll share my analysis after the table:

Overall, the ingredients for RXBARs are pretty wholesome. That said, the dates could be a concern if you’re worried about total sugars or carbs. And the sodium could be high for some people, as well. So let’s look at those specific issues next.

2. Do RXBARs Have Sugar?

Below is a table showing the sugar content for a variety of RXBAR flavors:

How does this sugar content compare to other popular protein bars and energy bars? Let’s take a look:

Personally, the amount of sugar in RXBARs is a bit high for me. I’ve noticed that I seem to get more acne when I eat that much sugar at once, even if it comes from fruit like dates.

That said, RXBARs are actually in the average range for this kind of protein bar or energy bar. And the sugar at least comes from a natural fruit source (dates). So it’s not the worst when compared to other popular options.

3. Are RXBARs High in Sodium?

Here is a table showing the specific sodium content for a variety of RXBAR flavors:

As you can see, the sodium content of the highest-sodium RXBARs is about 6 times as high as the lowest-sodium flavor. So choosing the right flavor is important if you care about sodium content.

If you want an RXBAR alternative that is low in sodium, be sure to look at Larabars. Even the highest-sodium flavor only has 90mg of sodium per bar, and many flavors are completely salt-free.

4. Are RXBARs High in Fiber?

RXBARs have about 3g to 5g of fiber per bar, depending on the flavor. The RXBAR flavors with the highest fiber are Chocolate Sea Salt, Coconut Chocolate, Peanut Butter, and Peanut Butter Chocolate.

This amount of fiber seems pretty typical for such protein bars or energy bars. I just checked a bunch of Larabars, and many flavors have 3g per bar, as well. Nature Valley Bars are around the same amount, too, depending on the product line.

5. Are RXBARs Good for Weight Loss?

RXBARs can be part of a healthy weight loss diet… But they’re quite calorie-dense, as they contain quite a bit of dates (one of the highest-sugar fruits) and nuts. So you need to be careful of overeating.

Most of the ingredients used in RXBARs are healthy, but they are some of the more high-calorie healthy foods. For example, nuts are very calorically dense. This is because fat has 9 calories per gram, compared to only 4 calories per gram of protein or carbs.

Here’s a thought experiment to help you understand why RXBARs are not the absolute best for weight loss: First, picture the size of an RXBAR in your head.

Now ask yourself: Is that RXBAR bigger or smaller than a banana? Well, it’s clearly smaller.

But which one has more calories, the banana or the RXBAR? Well, if you look it up, the RXBAR has almost twice as many calories!

So you see: The RXBARs has more calories, despite taking up less volume. And if you repeat this series of question with more juicy fruits, the answer will be even clearer and more pronounced.

My point is that RXBARs have quite a bit of calories for the amount of space they fill in your stomach. They are quite calorically dense. And caloric density is one of the key concepts you should utilize if you want to lose weight without counting calories.

Now, it’s worth considering that RXBARs do have a good bit of protein and fiber, which are both beneficial for filling you up and keeping you full, so you don’t keep eating all day.

Still, I think RXBARs should probably not be a big focus in a diet designed for weight loss. You can lose weight while eating RXBARs, but you’d likely lose weight more easily if you focus on juicy fruits, vegetables, and other lower-calorie foods as snacks.

RXBARs are less processed than most protein bars or energy bars. Instead of refined sugar or syrup, RXBARs are sweetened with dates. They also contain whole nuts rather than processed oil. However, they still have added salt, and the Plant flavors use pea protein rather than whole peas.

Really, RXBARs are mostly made of whole foods. They are quite good in this respect. They are similar to Larabars in that dates and nuts are the main ingredients, rather than any processed sugars, flours, or oils.

Eating an RXBAR every day should be fine for most people. RXBARs are made primarily of healthy whole foods, and they don’t have an extreme amount of any specific nutrient, so the risk of toxicity or deficient should be low.

But what about eating multiple RXBARs every day? At some point, you should start to be concerned about the amount of variety in your diet. Variety is important to make sure you’re getting a mix of nutrients, without getting way too much of one thing.

Recall that some RXBAR flavors have 310mg of sodium. If you had 3 of those bars, you’d already have ~930mg of sodium, while only eating ~630 calories. So depending on what you eat the rest of the day, you could easily surpass your recommended intake of sodium.

That said, 2 RXBARs a day is probably still fine for most people. (This is not medical advice. Obviously, consult your physician if you want a better quality answer, tailored to your specific situation.)

To help make dietary choices, you can also use an app like Cronometer to track your nutrient intake. Also keep a journal to see how your energy levels feel and if you have any unusual digestive symptoms (gas, bloating, diarrhea, constipation, etc).

Most RXBAR flavors are not vegan, as they contain egg whites. However, RXBAR Plant bars are a vegan product line made by the same company. They contain pea protein instead of egg whites, making these protein bars vegan-friendly.

As a vegan who travels a lot, I was actually excited to see RXBAR launch some vegan flavors. I really like how RXBARs are made with whole foods, and I like that they have more protein than Larabars. I might just pack a couple for my next international flight.