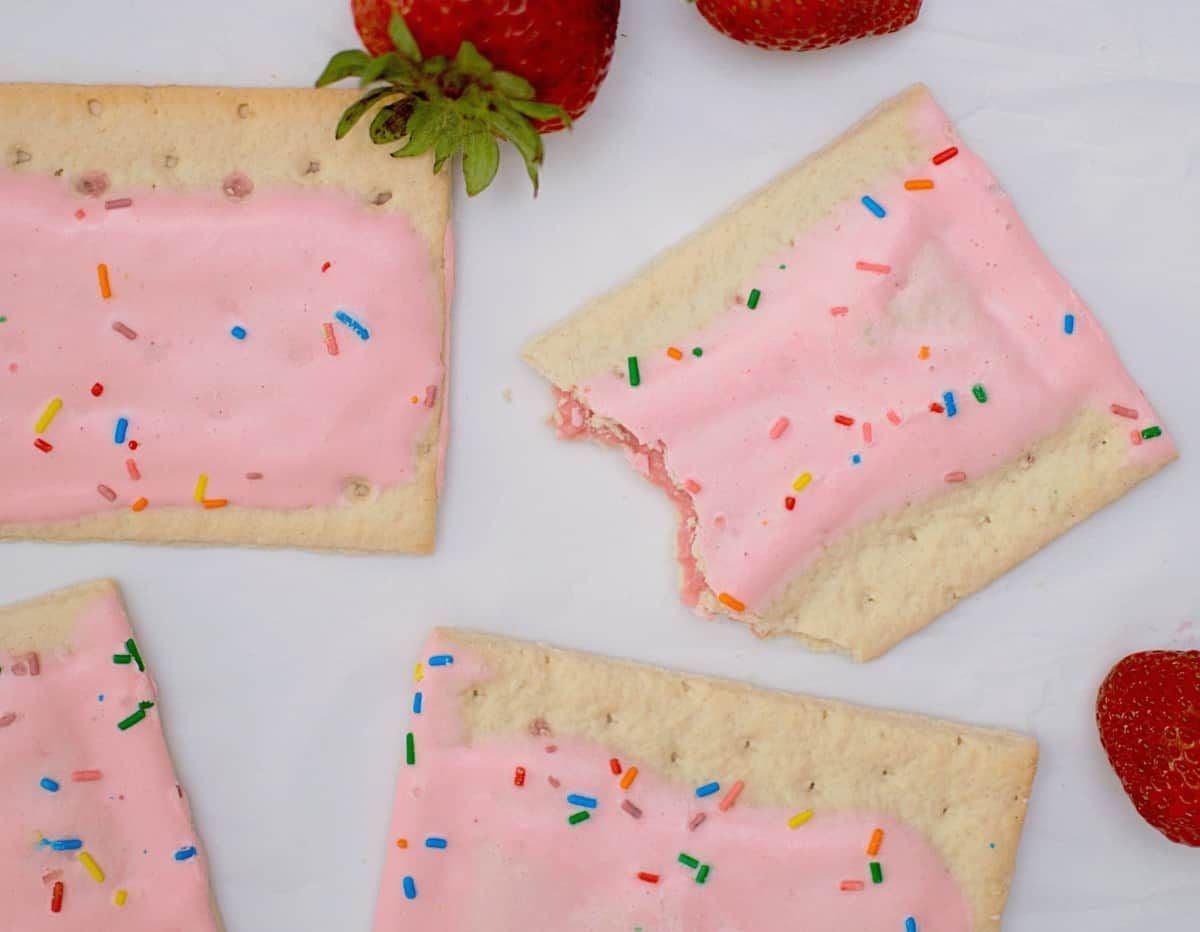 Okay, so, which animal ingredients will you find in Pop-Tarts?

Here are the 5 culprits that are definitely derived from animals. Below, we’ll also discuss some “gray area” ingredients, too.

Now, let’s see which Pop-Tarts we can already rule out based on these ingredients.

So, what Pop-Tart flavors does this leave without clear animal ingredients?

There are three Pop-Tart flavors that are generally considered vegan. Basically, it’s all the Unfrosted ones! Which makes sense because the frosted ones use gelatin to hold on the frosting.

So for many vegans, that’s the only answer you need. However, if you’re a vegan nerd, you’ll know there’s more to the story…

There are a few more controversial ingredients in Pop-Tarts for vegans. If you’re an extra picky vegan or concerned about the following issues, then be aware!

Bone char from cattle is often used to filter sugar to make it whiter. So some vegans avoid refined sugar where this is likely. The challenge with avoiding “bone char sugar” is that it’s not labeled as such on the package.

All 3 vegan pop-tart flavors contain palm oil. But some vegans boycott palm oil. Why? Tigers, orangutans, and other animals have been losing habitat due to unsustainable palm oil farming. For more on this issue, check out this article.

Fortunately, it looks like the palm oil in Pop-Tarts is sustainably sourced. This palm oil guide from the Columbus Zoo lists brands to support as members of the Roundtable on Sustainable Palm Oil (RSPO). Kellogg is on the list—and Pop-Tarts are owned by Kellogg.

If this is an issue that especially concerns you, you can do more research into it. But it seems that Kellogg is following the best practices for palm oil, as specified by the RSPO.

Artificial colors like Red 40 are made from petroleum, not animals. But some vegans avoid them. Why? They’re still tested on animals, due to ongoing safety concerns.

Some of the animal tests are really sad, too. As I wrote about in my post about Blue 2, they fed blue dye to beagles to see how long it would take to kill them.

Note: If you want to avoid artificial colors in Pop-Tarts, you can choose the Unfrosted Brown Sugar Cinnamon flavor, as it contains no artificial flavors.

“Natural flavors” is a catch-all term to describe many things used as natural sources of flavor in foods. This means it can be animal-based or plant-based. So, should you avoid “natural flavor”? It’s an issue vegans disagree about.

In the case of Pop-Tarts, they’ve actually labeled the source of natural flavors when they’re milk-derived. So personally, I just avoid it when it actually says it’s from milk. When it’s not specified, I don’t worry about it.

Unfortunately, a lot of the organic and “natural” toaster pastries out there—such as Annie’s and Nature’s Path—are still not vegan.

Are there any good, all-vegan toaster pastry brands?

Well, the Bobo’s brand that has clearly stated: “All of our […] Toaster Pastries are made free of animal products or by-products” (source). I haven’t got to try Bobo’s myself yet, but their flavors look delicious.

Another option is to make your own vegan toaster pastries at home. This is actually not as difficult as you might think at first. Here are a few of the top-rated recipes online: