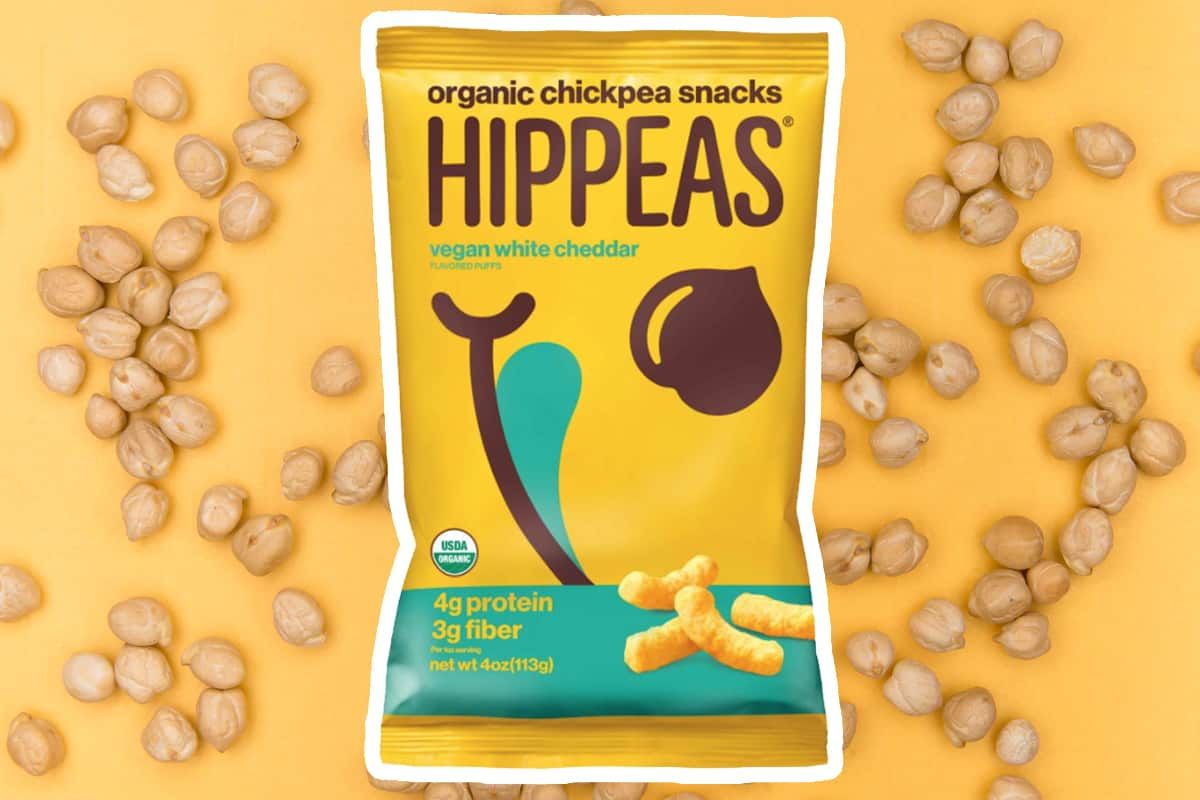 I won’t lie—Hippeas are delicious. My mom brought some on a family trip last year, and I pretty much ate the whole bag before anyone else could have any… That said, I felt kind of disgusted with myself afterward!

Hippeas are healthier than most “puff” snacks, with around half the sodium, 3x the fiber, and 2x the protein of Cheetos Puffs. However, they are still salty snacks made of processed flour and oil. In fact, they have more sugar than Cheetos. They’re much less healthy than whole foods.

Below, I’ll dig into the details of Hippeas ingredients, nutrition facts, and how they compare to other snacks like Cheetos. I’ll also look at the question of whether Hippeas are good for weight loss. And I’ll end by looking at Hippeas Chips!

What Are Hippeas Made Out Of?

Let’s start by looking at the ingredients for Hippeas. Here’s the most popular flavor, from what I can tell. The other flavors have similar ingredients, too:

So, Hippeas are mainly made of flour and oil—just like other puffs and chips. The biggest difference is that the main flours are chickpea and rice flour—not potato, corn, or wheat. (This also makes Hippeas gluten-free.)

There are two kinds of oil found in Hippeas, but sunflower oil is the main one. Also, as you can see, there are various flavoring ingredients, like salt, onion powder, and garlic powder. Nothing too surprising there.

I’ll evaluate these ingredients in more depth below—but first, let’s take a look at the nutrition facts for Hippeas.

Here are the basic Nutrition Facts for the Vegan White Cheddar flavor of Hippeas. The other flavors are pretty close to this, too:

As you can see, there’s no saturated fat or trans fat in Hippeas—so that’s one positive thing to notice. I’ll also mention: Look at the 3g of dietary fiber and 4g of protein. Those numbers may not be shockingly high, but they’re better than your average cheese puffs or chips!

Now let’s really get into evaluating whether Hippeas are healthy or not.

Are Hippeas Good for You?

When it comes to judging a food as “healthy” or “good for you,” it always depends what food you’re comparing it with. Any processed food will fail in a head-to-head battle with kale. But Hippeas are not realistically competing with kale in most peoples’ diets.

So let’s start by comparing Hippeas with one of their biggest competitors, Cheetos Puffs.

Are Hippeas Healthier Than Cheetos?

So, here’s what I’m noticing when I compare these snacks:

Hippeas are healthier than Cheetos by almost every measure. Even when it comes to sugar—the one area where Hippeas lost—the total sugar in Hippeas is still nothing to be too alarmed about (only 2g).

Did you know that sugar can worsen acne? A lot of people don’t realize how much acne is affected by diet. As it turns out, it’s one of the main factors. See my big post on acne and diet here.

Are Hippeas Baked Or Fried?

Hippeas are baked, not fried. This may be part of what allows Hippeas to contain only half the fat and around 80% of the calories of Cheetos puffs.

However, being baked doesn’t automatically make a snack food healthy. In fact, most “baked” snacks are only slightly better, if at all. Some health writers believe baked chips are worse than regular chips.

Are Hippeas Good For Weight Loss?

Hippeas can be eaten in moderation on a weight-loss diet. Compared to other “puffs,” they are lower in fat and higher in fiber and protein, making them more filling with fewer calories. However, they are still easy to overeat due to being a salty processed snack.

When it comes to weight loss, your total calorie balance is what matters most. So any food could be part of a weight-loss diet, if eaten in moderation.

Looking at Hippeas from this perspective, they’re better than other “puffs” like Cheetos—but they’re much worse than whole foods like actual chickpeas.

Whole chickpeas have about double the fiber and double the protein of Hippeas per serving. The #1 ingredient in Hippeas is “chickpea flour,” but whole chickpeas would be far better for weight loss.

All flavors of Hippeas are confirmed vegan. Even the “cheese” flavors are vegan—they are just seasoned with onion powder, garlic powder, and other vegan seasonings. They do not contain milk, eggs, lard, or any other animal ingredients.

To get a quick picture of Hippeas Chips from a health perspective, let’s compare them to normal corn tortilla chips, such as “Original Restaurant Style” chips by Tostitos.

So, here’s what I see when I compare these chips:

Overall, it’s not clear that Hippeas Chips are better or worse than Tostitos chips. Overall, I’d even say the Tostitos may look slightly healthier.

The bottom line is they’re both relatively simple when it comes to ingredient—but oil, flour, and salt is always going to carry some risk of overeating and not providing many nutrients compared to eating whole foods.