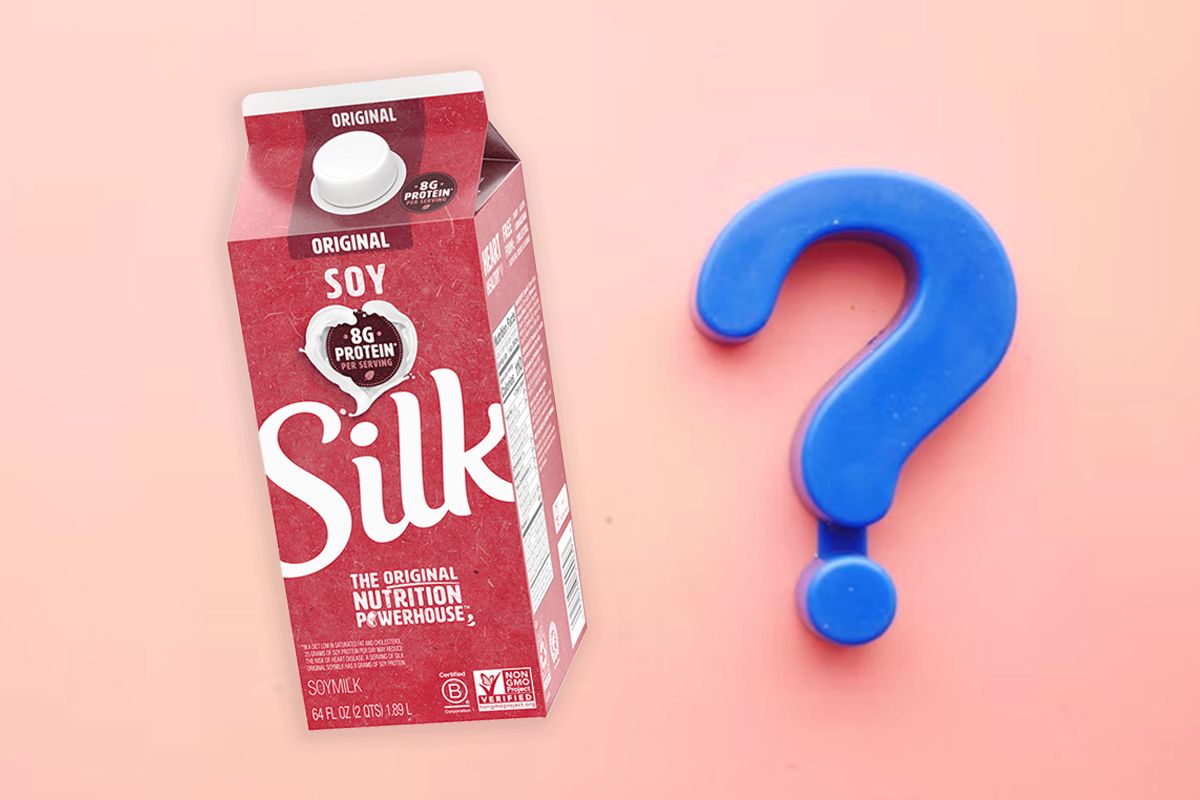 So, things got pretty crazy last night, and you left out your soy milk? It happens to the best of us. But now it’s morning, and you’re just wondering: Is this soy milk still safe to use?

Soy milk left out for more than two hours (including overnight) should be thrown out unless it is in an unopened, shelf-stable package. Even if the soy milk does not show signs of spoilage, it could have unsafe levels of bacteria or toxins produced by those bacteria.

Below, I’ll give you the full explanation of why it’s potentially unsafe to use soy milk that was left out. I’ll also clarify which soy milks are shelf-stable, how long they can be refrigerated after opening, how to tell if soy milk is bad, and more.

The first important thing to realize with this issue is that there are two types of soy milk you can buy in the store: Shelf-stable and refrigerated.

Keep in mind that most of this blog post is about (1) refrigerated soy milk and (2) shelf-stable soy milk after it has been opened. Those are the cases in which your soy milk is perishable.

If your soy milk is still unopened in a shelf-stable Tetra Pak, then you don’t need to refrigerate it yet. It’s fine to leave it out at that point, even for weeks or months.

So now, let’s answer some questions about how to handle your perishable soy milk.

How Long Can Soy Milk Sit Out Unrefrigerated?

Here is the official answer, based on USDA recommendations: Soy milk should not be consumed if it was left out for more than two hours. This applies to refrigerated soy milk or shelf-stable soy milk after it has been opened.

Temperatures between 40 and 140 °F are often referred to as the “Danger Zone.” In this temperature range, bacteria multiply quickly, and these bacteria can make you sick. (source)

If it’s extra hot in your house (over 90°F or 32°C), then the rule is only one hour. After merely one hour left out in those hot temperatures, soy milk should be discarded. This applies if you leave a carton of perishable soy milk in a hot car, for example.

If you ask friends about this topic or read on Internet forums, you will hear from people who say it’s fine to use soy milk that was left out. Some will say they do it all the time and they’ve never gotten sick.

However, the FDA estimates there are 48 million cases of foodborne illness each year in the United States. Many people mistake food poisoning for something like the stomach flu.

So, it’s possible that many of these reckless folks have gotten sick from eating foods that were left out. They just didn’t realize the connection.

Some people may also tell you that if you boil the soy milk, that would kill any bacteria that had grown. First, that seems weird to boil soy milk. But secondly and more importantly, this is misleading.

Therefore, if you want to be on the safe side, you should just throw out the soy milk if it’s been left out overnight (or more than two hours).

Can Bad Soy Milk Give You Food Poisoning?

What happens if you drink bad soy milk? Can you get seriously sick? Drinking bad soy milk could cause symptoms like nausea, vomiting, diarrhea, fever, and stomach cramps. (source)

As noted above, cases of food-borne illness are often mistaken for the stomach flu—so, think of those kinds of symptoms. However, depending on which bacteria have multiplied, how many there are, and other factors, the health consequences could be more severe yet.

Personally, I do not recommend pushing the boundaries with bad soy milk or any food products that have been left out. After all, it’s typically just a few dollars to buy a new container.

Can Soy Milk Go Bad If Not Opened?

Soy milk will eventually go bad, even if not opened. However, shelf-stable soy milk will often last for months or years, much longer than refrigerated soy milk.

How To Tell If Soy Milk Is Bad

You may have heard some of the following ways to check if your soy milk has gone bad:

These can indeed help you identify some cases of spoiled soymilk. But I would not rely on these signs alone.

When it comes to soy milk that was left out unrefrigerated, you shouldn’t try to judge if it’s bad solely by using your senses. You should also make the decision based on the number of hours it has spent in the “danger zone” of 40 to 140°F.

If it was in the “Danger Zone” for more than 2 hours, it should be thrown it out, according to USDA recommendations. Additionally, if it’s been open in the refrigerator for more than 7-10 days, it should also likely be thrown out. (More on that below.)

Unfortunately, you cannot rely on your sense of smell and taste to know for sure whether soy milk has gone bad. As WebMD’s guide explains, “Food contaminated with the staph toxin may not look or smell bad, so you may not know to avoid them.”

This is explained further in a fact sheet from the FDA:

As the same document goes on to explain, many foods have a small amount of pathogenic bacteria when you buy them from the store. So, all it takes is a few hours in the “danger zone” (40 to 140 degrees Fahrenheit), and those bacteria can multiply many times.

The takeaway: Don’t try to “figure out” if your soy milk went bad by looking at it, smelling it, or tasting it. You cannot accurately judge the levels of pathogenic bacteria that have multiplied with your senses alone.

Many soy milk containers may advise using it within 7 or 10 days of opening. But often, it will still look and smell fine by then. So, is it okay to drink your soy milk on day 11 and beyond? Or not?

According to several experts who work for plant-based milk companies, 7-10 days is just a general, conservative guideline. If you’ve been diligent about keeping your soy milk closed tightly in the refrigerator, then it will likely last longer.

For example, a representative from Ripple Foods explained why they only guarantee their product’s safety for 7-10 days after opening. The product will probably still be safe after that, but it just depends on too many factors. So they give a conservative estimate.

So, it may be a bit of a risk to consume soy milk more than 10 days after opening… But most of the time, it will still be fine if there are no signs of spoilage (covered above).

Keep in mind, if you make your own homemade soy milk, that will only typically last around 3-5 days—not as long as store-bought soy milk.