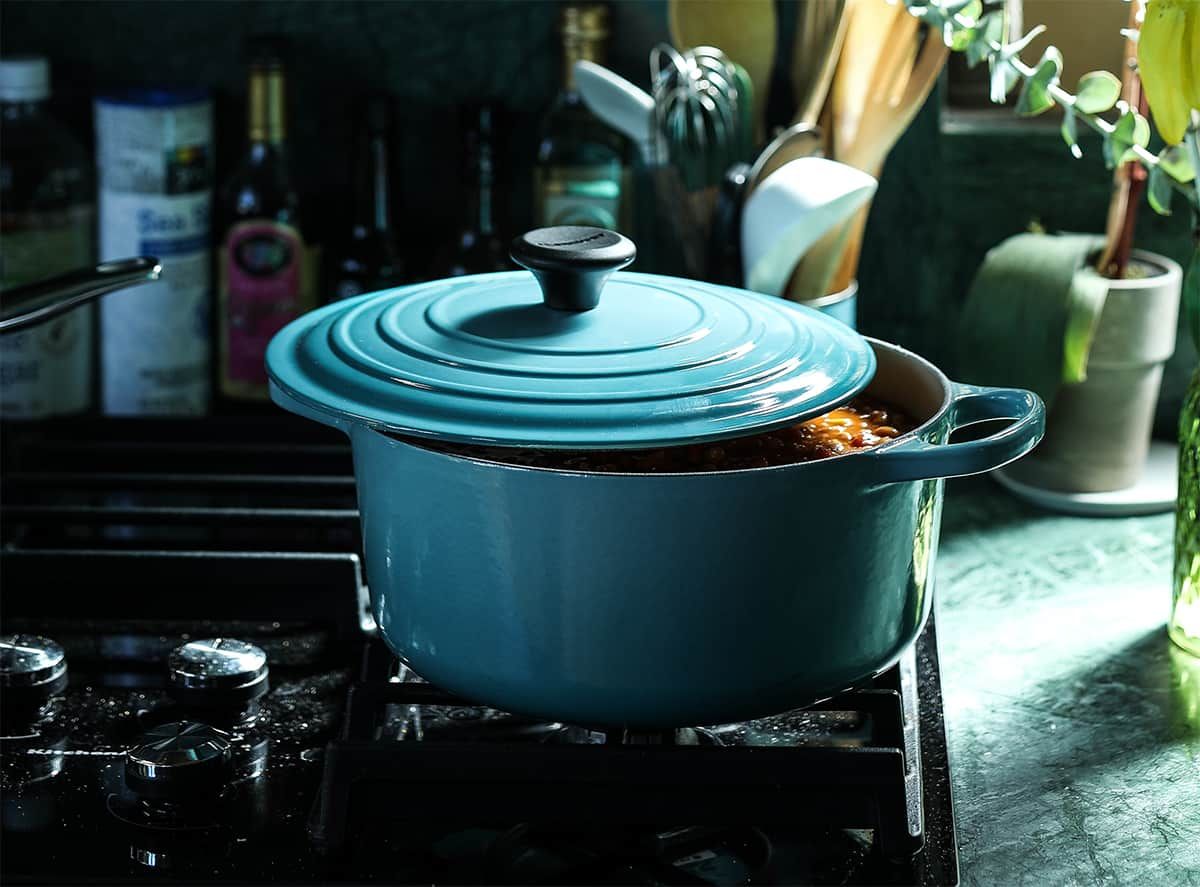 So, you left your soup or stew out overnight. You ought to be ashamed of yourself. Just kidding—it happens to the best of us. But now you’re wondering: Is this still safe to eat?

Soup or stew left out for more than two hours (including overnight) should be discarded according to the USDA. Even if you reheat it to kill bacteria, there may be toxins made by the bacteria, which reheating can’t destroy. This applies to all soups and stews, with or without meat.

Below, I’ll explain how to tell if soup or stew is bad, and what happens if you eat bad soup or stew. I’ll also answer some questions about leaving your soup in a crockpot or instant pot, and how to properly refrigerate soup. (Do you need to wait for it to cool?)

How Long Can Soup or Stew Sit Out Before It Goes Bad?

Here is the official answer, based on USDA recommendations: Stew or soup should not be eaten if it was left out for more than two hours. And if it’s extra hot out (over 90°F or 32°C), the rule is one hour.

This also applies to soup or stew that you left in a turned off crockpot or instant pot overnight. Once the soup cools below 140°F, it’s in the “Danger Zone,” and bacteria can multiply for the rest of the night.

If you ask your friends about this topic or read around on Internet forums, you will hear from people who say that it’s fine to eat soup or stew that was left out. Some will say they do it all the time and they’ve never gotten sick.

However, the FDA estimates there are 48 million cases of foodborne illness each year in the United States. Many people mistake food poisoning for something like the stomach flu. So common people may not be the best authorities to ask on this subject.

People may also tell you that if you reheat the soup or stew, it will kill any bacteria that had grown. But this is misleading.

Cooking food does not rid it of all possible toxins that were created by the bacteria—even if it kills the bacteria itself. For example, Staphylococcus aureus bacteria produces toxins, which reheating cannot destroy.

Therefore, if you want to be on the safe side, you should just throw out the soup or stew that got left out.

Can I Leave Cooked Food in the Crockpot Overnight?

If your crockpot, slow cooker, or instant pot is heating the food above 140°F overnight, that should be okay. But don’t leave your soup sitting overnight in a device that has been powered off.

Perishable, cooked food should not be left between 40°F and 140°F for more than two hours. When you leave food out overnight without applying heat or refrigeration, even in a crockpot or instant pot, there is too much time for bacteria to multiply.

Especially in between 50 degrees and 120 degrees Fahrenheit, Staph aureus bacteria can reproduce rapidly. So you shouldn’t leave stew or soup in a pot of any kind overnight at room temperature (even with a tightly sealed lid).

Can You Reheat Soup Left Out Overnight?

Reheating soup left out overnight will not necessarily make it safe. Many bacteria, including Staph, can produce toxins which can’t be destroyed by reheating. Therefore, even bringing the soup to a boil again will not make it safe.

If the soup or stew was refrigerated overnight, then of course, reheating the next day is fine. But it should not be left out unrefrigerated for more than two hours. The idea is to always keep perishable foods hot or cold—not in between where bacteria can multiply.

How Can You Tell If Your Soup Is Bad?

When it comes to soup or stew that was left out, you shouldn’t try to judge if it’s bad by using your senses. Make the decision based on the number of hours that it has spent in the “danger zone” of 40 to 140°F since being cooked.

Obviously, if you see visible signs of spoilage (or if it smells bad), that may be a sign to throw it out, too. But don’t expect that all “bad” soup will necessarily look or smell bad.

Unfortunately, you cannot rely on your sense of smell and taste to know for sure whether soup or stew has gone bad. This is explained in a fact sheet from the FDA:

Here’s the takeaway: Don’t try to “figure out” if your soup went bad by looking at it, smelling it, or tasting it. You can’t accurately judge the levels of pathogenic bacteria that have multiplied by using your senses alone.

What If the Soup Doesn’t Have Meat or Milk?

Many people think there is only a risk of leaving out foods like meat and dairy. But in fact, the same two-hour rule applies to plant-based soups and stews, too. And really, it applies to any food that is supposed to be refrigerated.

Whether your soup contains meat, milk, or cream doesn’t change how you should treat it. If it was left out at room temperature overnight, the USDA would recommend throwing it out. Even for vegetable stew, tomato soup, and so forth.

What Happens If You Eat Soup That Has Gone Bad?

Eating soup or stew that has been left out can cause Staph food poisoning. This can cause nausea, vomiting, diarrhea, and stomach cramps. Although less common, other types of food poisoning are also possible.

Can You Leave Soup Out Overnight to Cool?

One more tip: If the soup is hot, put it into multiple small containers in the fridge, rather than one big container. This will allow it to cool faster, and it will spend less time in the “Danger Zone” (40 to 140°F).

If there are large chunks of meat in the soup, also be sure to break those into smaller pieces, so they also cool faster in the fridge.

This approach (multiple small containers) will also make it less likely that the hot soup will warm up the fridge and bring other foods in the fridge into the “Danger Zone.”