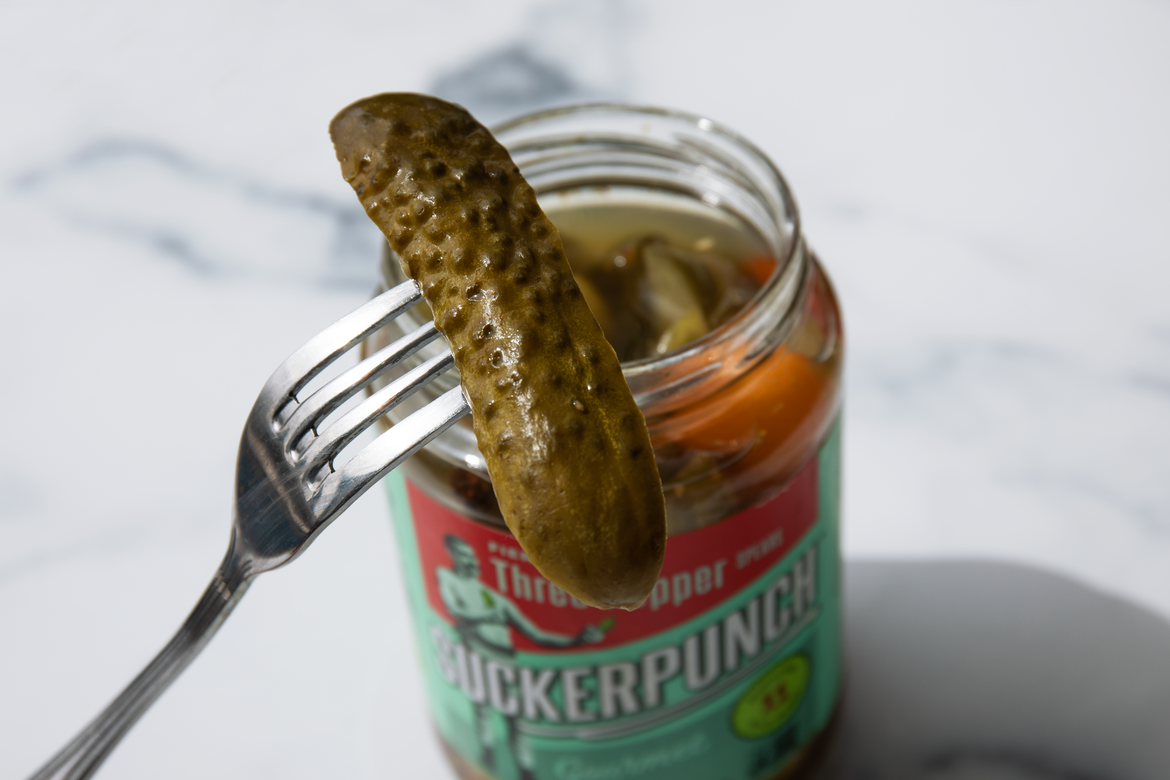 So, you forgot to put away your pickles last night. Shame on you! Just kidding—it happens to the best of us. But now you’re wondering: Are these pickles still safe to eat?

Pickles left out for more than two hours (including overnight) should be thrown away according to the official USDA recommendations for all foods requiring refrigeration. However, due to their acidic brine, pickles left out overnight may be less likely to actually cause food poisoning than other non-acidic foods.

Below, I’ll share quotes and responses from pickle companies about whether their pickles are safe after being left out. I’ll also explain when pickles need to be refrigerated, how to tell if they’ve gone bad, what happens if you eat bad pickles, and more!

The first thing to realize with this issue is that there are several types of pickles. And these pickles need to be treated differently:

So, keep in mind that most of this blog post is about (1) pickles that you find in a refrigerated section in the store, and (2) other pickles after they have been opened.

If your pickles were not being refrigerated in the store, and they are still unopened, then you typically don’t need to refrigerate them yet. It’s fine to keep them at room temperature at that point, even for weeks or months (as long as the “best by” date has not passed).

So, if you’ve got pickles that should be refrigerated according to those guidelines… How long can they be left out?

How Long Can Pickles Be Left Out?

Here is the official answer, based on USDA recommendations: Pickles should not be eaten if they were left out for more than two hours. And if it’s especially hot out (over 90°F or 32°C), the rule is one hour.

Temperatures between 40 and 140 °F are referred to as the “Danger Zone.” In this temperature range, bacteria can multiply quickly, and those bacteria can make you sick. (source)

People often think this rule only applies to certain foods, like meat and milk. But in fact, this rule applies to all foods that are normally refrigerated.

That said, with pickles, there is an extra reason why you might question whether there is really any risk. It’s the brine.

Could pickles be an exception to the USDA’s two-hour rule, because of the brine? Well, the salt concentration in pickle brine is pretty low—so it likely would not prevent bacterial growth on its own. But the acidity of the pickle brine should have some protective effect.

The fermented food company Bubbies actually answers the “left out overnight” question on their website’s FAQ. Here is their answer, as to whether their fermented foods (including pickles) are still safe after a night out:

“Luckily, our brine has very high acidity so our refrigerated products should remain safe if left out for a short period of time. That said, leaving Bubbies products unrefrigerated may make them a bit softer and more sour… Ultimately we cannot guarantee the quality of improperly stored foods, so you’ll need to use your best judgment when consuming.” (source)

So, here’s the big follow up question: How long is a “short period of time”? This is a conveniently non-specific answer, probably for legal reasons. Bubbies is saying the brine should keep things safe—but they’re not guaranteeing anything specific.

Personally, I wouldn’t push it much past the USDA’s general 2-hour rule.

If you ask your friends about this topic or read around on Internet forums, you will hear from people who say that it’s fine to eat pickles that were left out. Some will say they’ve done it many times and they’ve never gotten sick.

However, the FDA estimates there are 48 million cases of foodborne illness each year in the United States. Many people mistake food poisoning for something like the stomach flu. So common people may not be the best authorities to ask on this subject.

Someone may also tell you that if you heat up the food you left out—in this case, heating up the pickles—it would kill any bacteria that had grown. But this is misleading.

Cooking food does not rid it of all possible toxins that were created by bacteria—even if it kills the bacteria itself. Some bacteria, like Staph, produce toxins that are heat resistant.

Therefore, if you want to be on the safe side, you have to just throw out the pickles.

What Happens If I Leave Out a Sealed Jar of “Keep Refrigerated” Pickles?

What if you have a still-unopened jar of Claussen (or other “keep refrigerated”) pickles, and you kept at room temperature on accident? Many people have unwittingly done this by storing their refrigerated pickles in the cabinet instead.

Well, I found a report from a consumer who called Kraft Heinz, the makers of Claussen pickles, with this question. Specifically, the question was about an unopened pickle jar that was stored for a week and a half at room temperature.

Kraft Heinz’s response was that they could not recommend eating the product after a week and a half of it not being refrigerated. Maybe that answer was just to cover the company legally—but it’s an answer directly from a pickle company, anyway.

Another thing to consider is that, even if the product is not dangerous, it may have fermented further. Therefore, the taste and texture may have changed. So that may be another reason to just toss it.

(For a more technical discussion of how long refrigerated pickles keep, under which conditions, see this USDA document. It is likely a bit detailed and technical for most people reading this—but if you’re a nerd, then dig in.)

What Happens If You Eat Bad Pickles?

Eating pickles that have been left out can potentially cause Staph food poisoning. This can cause nausea, vomiting, diarrhea, and stomach cramps. And although less common, other types of food poisoning are also possible.

Many people have questions about pickles and botulism specifically.

Can You Get Botulism From Pickles?

Compared to Staph—which I’ve mentioned elsewhere in this blog post—Botulism is more serious. It requires emergency medical attention, and it can be fatal. So, is there a risk of foodborne botulism with pickles?

Botulism can potentially grow in improperly canned, homemade pickles. It is important to be sure you use enough vinegar to prevent the growth of botulism. That said, botulism is most common in other canned foods which do not contain acidic brine.

So again, yes, the acidic brine in pickles is protective against botulism. But make sure you have enough of that acid (vinegar). For more on this issue, see this guide to safely canning pickles.

How to Tell If Pickles Have Gone Bad

When it comes to pickles that were left out, you shouldn’t try to judge if they’re bad by using your senses alone. Make the decision based on the number of hours that they have spent in the “danger zone” of 40 to 140 °F.

If your pickles have been in the “Danger Zone” for more than 2 hours, they should be thrown out, according to USDA recommendations.

Obviously, if you see visible mold on your pickles (or if they smell bad and very different from usual), that may be a sign to throw them out, too. But don’t expect that all “bad” pickles will look bad.

Unfortunately, you cannot rely on your sense of smell and taste to know for sure whether pickles have gone bad. This is explained in a fact sheet from the FDA:

And these unnoticeable bacteria can even potentially include botulism—which, as we covered above, is quite serious.

Due to the acidic brine, the risk with pickles may not be as high as with some other foods. But there is still some risk. The pickle jars say “refrigerate” for a reason!

Here’s the takeaway: Don’t try to “figure out” if your pickles went bad by looking at them, smelling them, or tasting them. You can’t accurately judge the levels of pathogenic bacteria that have multiplied by using your senses alone.