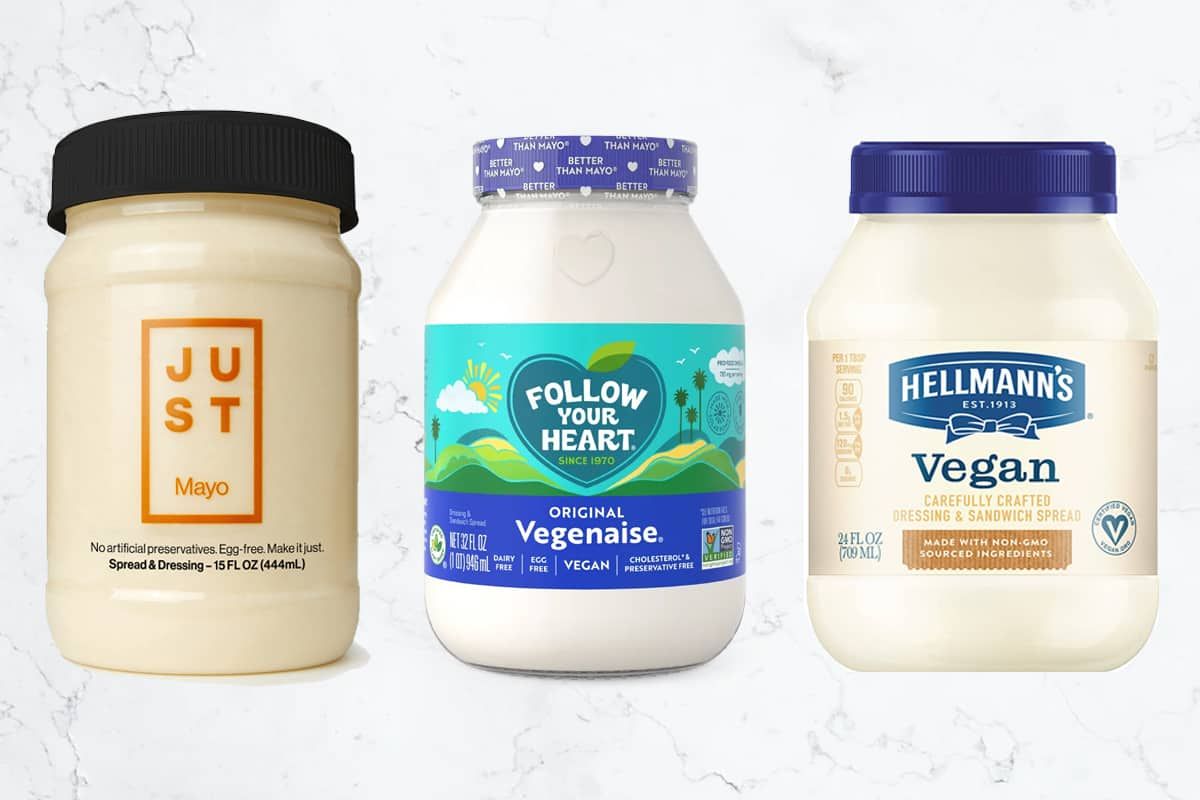 Did you know that Americans eat about $2 billion worth of mayonnaise per year? Vegan competitors like Just Mayo are slowly eating into that market share… But is vegan mayo actually a healthier option than regular mayo?

Vegan mayo may be a bit healthier than regular mayo, as it is cholesterol-free, and it often has fewer calories and healthier oils. However, store-bought vegan mayo is still processed. The main ingredient is oil, and it usually has modified food starch and sugar, too. Therefore, it’s still relatively unhealthy.

Below, I’ll take a detailed look at the ingredients and nutrition facts for 3 leading brands of vegan mayo. Then I’ll compare them to regular mayo and “light mayo.” I’ll finish by sharing 5 actually healthy vegan alternatives to mayo.

What Is Vegan Mayo Made Of?

Let’s start by looking at the actual ingredients in vegan mayo. Note that these products might not legally be called “mayo” depending on the laws where you live. But these are vegan spreads made to be mayo alternatives.

Anyway, let’s look at 3 of the leading brands. The first is a brand launched in 2013, JUST Mayo:

Next, let’s look at the classic brand that goes all the way back to 1995, “Vegenaise” by Follow Your Heart:

And lastly, here is Hellmann’s vegan mayo, first offered in 2016:

As you can see, the main ingredients in vegan mayo are oil, water, and vinegar. Sugar and modified food starch are also typically included pretty high in the ingredients. Now let’s dig into these ingredients a bit closer.

Vegan mayo is a processed food, as its main ingredient is refined oil. Most brands also contain modified food starch, sugar, salt, and isolated plant protein (like soy protein or pea protein). These are all processed ingredients, not whole foods.

Here are the patterns I see in the vegan mayo ingredients:

Does Vegan Mayo Have Sugar?

Vegan mayo typically has a very small amount of sugar. JUST Mayo and Hellmann’s Vegan both have “Sugar” as an ingredient, while Vegenaise has “Brown Rice Syrup,” which is a source of sugar. However, all three products have less than 1g of total sugar per serving.

However, none of the mayo products I checked have much sugar at all. Mayo is mainly fat, not sugar.

Now let’s look at the numbers. How does vegan mayo do when it comes to calories, fat, sodium, carbs, sugar, and the rest?

Again I’m looking at 3 leading brands of vegan mayo. Each brand has a serving size of 1 tablespoon:

Here’s what I notice when comparing these 3 brands of vegan mayo:

Since vegan mayo is typically used to replace regular mayonnaise, let’s see which is healthier. The table below compares the classic vegan mayo, Vegenaise, with two brands of normal, non-vegan mayo.

I chose to use Vegenaise to represent vegan mayo below, as it was the most “middle of the road” brand in terms of calories and fat.

Again, each brand has a serving size of 1 tablespoon:

Here’s what I notice when comparing vegan mayo to regular mayo:

So when it comes to the nutrition facts, the vegan mayo looks a bit healthier. But let’s also compare the ingredients real quick.

Which Has Healthier Ingredients?

When I compare this to the vegan mayo ingredients above, I notice:

So, I would say that vegan mayo has a bit healthier ingredients than the regular mayo brands I checked. This is mainly based on the oil used. If you bought regular mayo that used avocado oil or another healthier oil, that would make regular mayo healthier.

Now, how does vegan mayo compare to “light mayo”? Light mayo is made with less oil than regular mayo, so it’s lower in calories and fat.

Again, the serving sizes are 1 tablespoon each, and I’m comparing one vegan mayo (Vegenaise) to two “Light Mayo” products:

However, let’s take a look at the ingredients in light mayo, too. See if you can notice how they’re making a lower-calorie product:

As you can see, “light mayo” is lower in calories because there is less soybean oil per serving, more water. However, to make up for that in the taste, they add modified food starch and more sugar.

So it’s not like Light Mayo is an actual health food. It’s still loaded with processed stuff. It’s just got less of the oil, which is the most calorie-dense ingredient. Therefore, it’s lower in calories overall.

If you’re solely focused on cutting calories, then Light Mayo may be better than vegan mayo. But if you want to avoid processed ingredients, then vegan mayo may be the better choice, or they may be about equal.

So, is vegan mayo less fattening than normal mayo? Maybe by a bit, but the difference is not huge. If I was aiming at fat loss and I wanted to eat some kind of “mayo,” I would probably choose JUST Mayo, as it only has 60 calories per tablespoon.

Does Vegan Mayo Have Fewer Calories?

Vegan mayo contains slightly less calories than regular mayo on average. However, this varies by brand. From the vegan mayo brands I checked, JUST Mayo was the lowest in calories, with 60 calories per tablespoon. That’s about 33% lower than most regular mayo.

That said, JUST Mayo was the lowest in fat of the vegan mayo brands I checked, with only 6g of total fat. That’s only 60% of what most regular mayo brands contain.

Is Vegan Mayo Good for Cholesterol?

However, most brands of vegan mayo still contain a bit of saturated fat and sodium, so there could be healthy spread and condiment choices that are even more heart healthy than vegan mayo.

Let’s look at some of those now!

We’ve seen above that vegan mayo is maybe a bit healthier than regular mayo, but not a lot. What if you want to replace your mayo with something actually healthy? What are your options?

Here are some ideas: