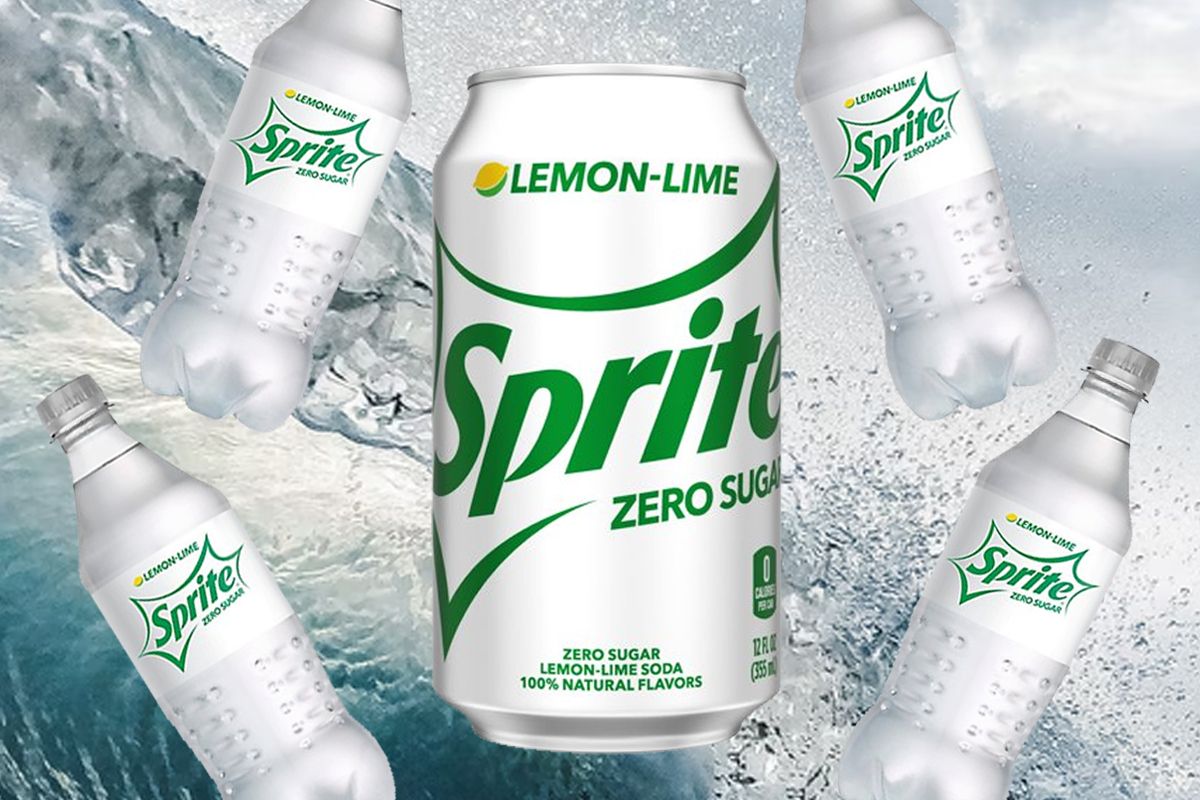 You may have heard that “diet sodas are even worse than regular.” But is it really true? Why would artificial sweeteners even be legal, if they’re so bad? Today, let’s look at one specific diet soda, Sprite Zero, and try to determine: Is it healthy?

Is Sprite Zero Bad for You?

Here are the 9 specific questions I’ll be answering about Sprite Zero nutrition. Click any of them to skip ahead to that section—or just keep scrolling to read them all:

1. What Is Sprite Zero Made Of?

Let’s start by looking at what Sprite Zero actually contains:

Here are my takeaway points on Sprite Zero’s ingredients:

As you can see, the main concern about Sprite Zero for most people would just be the artificial sweeteners (aspartame and acesulfame potassium).

So, let’s look more closely at those sweeteners next.

2. Does Sprite Zero Have Artificial Sweeteners?

Sprite Zero contains the artificial sweeteners aspartame and acesulfame K. These are two of the most widely used artificial sweeteners in the world, and both FDA approved. However, studies have suggested possible links to cancer, heart disease, obesity, stroke, Alzheimer’s, depression, and more.

Let’s start by discussing aspartame, since it’s especially controversial. It’d be hard to cover all of its possible health risks here. If you want to go deep on this subject, start with this page from U.S. Right to Know. That said, I’ll try to summarize.

Now, what about the other sweetener in Sprite Zero—acesulfame potassium? This sweetener is often referred to as “acesulfame K” or “Ace-K.” Here are some concerns people have with it:

Overall, the long-term health concerns with artificial sweeteners are just that—concerns. If they were proven to be unsafe, they would probably not be approved by the FDA and other government bodies around the world.

The important thing is to acknowledge that you may be taking some amount of risk with the artificial sweeteners in Sprite Zero. But you may be just fine, especially in moderation.

Since Sprite Zero doesn’t have carbs, we could expect that it doesn’t raise blood-sugar in the short term. That is, it should not cause a “blood sugar spike” after drinking it.

However, whether Sprite Zero will raise your blood-sugar in the long-term is a different question, and a harder one to answer.

Research suggests that many zero-calorie sweeteners can alter your gut bacteria in a way that worsens your tolerance to carbs on a long-term basis.

Here’s a broader study on how non-caloric sweeteners can induce glucose intolerance by altering gut bacteria. And here’s a simpler YouTube video discussing the science overall.

And that’s not all. Some authorities also worry about zero-calorie sweeteners causing blood-sugar issues through a whole different mechanism.

That is, non-caloric sweeteners can decouple sensations of sweet taste from the presence of actual sugar in your meal. This can make it harder for your body to properly “know” when it needs to release insulin in the future.

It’s kind of like “The Boy Who Cried Wolf“: With artificial sweeteners, your brain perceives sweet taste, so it starts to prepare for a blood-sugar spike… but then the sugar never comes—it was a false alarm.

So over time, your brain stops preparing as much for real sugar when you taste sweetness, and your metabolic response becomes less sensitive and effective.

That’s the theory, anyway. For more detail, you can listen to Susan Swithers, professor of psychological sciences at Purdue University, on the Science Friday podcast. Or read her article in Trends in Endocrinology & Metabolism.

In any case, proceed with caution. If blood-sugar control is crucial for you, don’t assume Sprite Zero is completely safe. And keep in mind that some effects may be delayed, via changes to how your gut bacteria affects your glucose tolerance.

4. Does Sprite Zero Have Caffeine?

Sprite Zero does not contain caffeine. It is not an energy drink. It is not advertised as providing caffeine, and none of the ingredients have caffeine naturally. Sprite Zero should not keep you awake.

5. Is Sprite Zero High in Sodium?

Of course, if you drink Sprite Zero all day, you could end up consuming several hundred milligrams of sodium from it. So be mindful if you’re trying to keep your sodium levels in check.

One of the reasons people choose diet drinks like Sprite Zero is to help them lose weight. But the evidence shows that consuming artificial sweeteners is surprisingly ineffective for weight loss. And they may even lead to weight gain.

One explanation is that artificial sweeteners keep you accustomed to sweet foods. So you still get cravings for sweets, and you end up eating more calories from something else.

The issue may also have something to do with how these sweeteners affect your gut bacteria. But in any case, drinks with aspartame and other artificial sweeteners (like Sprite Zero) may not be the best for weight loss.

But remember: The key to weight loss is your overall diet and calorie balance. Having a can of Sprite Zero will not doom you to gain weight, if the rest of your diet is solid.

If your goal is weight loss, I would recommend just (A) tracking your calories, or (B) following some of these 18 tips for weight loss without counting calories. Then, you can choose to have Sprite Zero or not, depending on your preferences.

7. Is Sprite Zero Healthier Than Sprite?

Sprite Zero has a similar taste as Sprite, but without the high fructose corn syrup (sugar). For this reason, many people would consider Sprite Zero healthier than regular Sprite. However, Sprite Zero has artificial sweeteners, which come with other possible risks. Therefore, it depends on your priorities and concerns.

Personally, I’d rather drink Sprite Zero than regular Sprite. The sugar in normal Sprite is way too much for me personally. I try to avoid spikes in my blood sugar due to how it affects my acne.

However, I wouldn’t want to drink a lot of Sprite Zero on a regular basis, either. As covered above, it could potentially have a negative effect on my insulin sensitivity, and it could possibly cause other problems eventually.

Neither Sprite Zero nor regular Sprite are really healthy drinks. Drinking something like the Lime flavor of Bubly—a sparkling drink without any sweetener—would be a much healthier option.

8. Is It Bad to Drink Sprite Zero Every Day?

Personally, I wouldn’t feel comfortable drinking Sprite Zero every day. Why? The main reason is aspartame.

The research into aspartame and depression was what initially convinced me to avoid the ingredient. But there are many possible negative affects, detailed above.

I would personally only have Sprite Zero as an occasional treat.

Sprite Zero is generally considered vegan. Technically, it is possible for the natural flavors to be sourced from animal-derived ingredients, but this is not likely.

It’s also possible that someone would say Sprite Zero isn’t vegan is due to animal testing. That’s because the artificial sweeteners used in Sprite Zero (aspartame and acesulfame-K) have been tested on animals extensively in the past.

However, boycotting drinks like Sprite Zero today can’t undo the animal testing that was already done… So, most vegans are okay with consuming these artificial sweeteners.