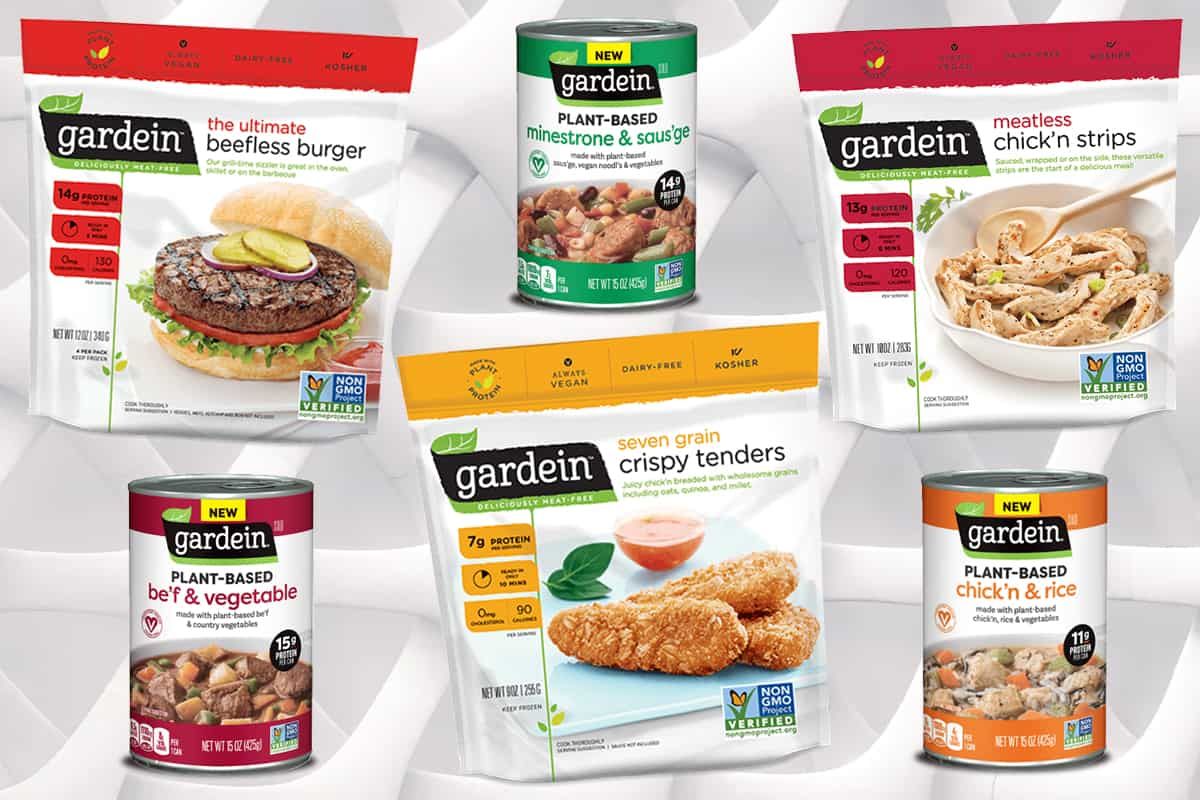 Gardein is one of the leading brands of so-called “fake meat” on the market today. They have a wide range of products, including plant-based jerky (!), along with veggies burgers, “meatless chick’n strips,” and more. But are Gardein meat alternatives actually healthy?

Gardein products are generally considered healthier than meat due to their low saturated fat and cholesterol content. However, most Gardein products contain processed flour, refined oil, and a moderate to high amount of sodium. Therefore, Gardein is less healthy than whole plant foods such as beans, vegetables, and fruit.

Below, I’ll dig into the sodium content and protein content of various Gardein products. I’ll look at whether Gardein counts as “processed food” and why. And I’ll end by looking at whether or not Gardein is good for weight loss specifically!

What Is Gardein Made Of?

First, we need to start with the basic facts: What do Gardein products actually contain? Let’s look at some Gardein ingredients.

Let’s start with one of Gardein’s most famous products, which has been around for years. These are their “Crispy Tenders” (basically vegan chicken fingers):

We’ll also be looking at a full Gardein “meal”—specifically, the Orange Beefless Bowl. This dish includes rice, veggies, and sauce along with the actual fake meat:

Lastly, we’ll be looking at Gardein’s plant-based jerky, which is a relatively new product. Here’s the ingredients:

Before we move onto analyzing these ingredients, we’ll also take a look at the rest of the Nutrition Facts label for these products. That will give us a sense of just how much sugar, sodium, protein, and other nutrients are included.

Below is a table with the nutrition facts for those same three Gardein products. You’ll notice that the serving sizes are quite different. (The Bowl serving is much larger than the other two.)

But our main goal is not to compare these products to each other. We’re just looking to get a sampling of what Gardein products look like nutritionally. So this works for our purposes:

Alright, now that we’ve gotten a bird’s eye view of the ingredients and nutrition facts for three different Gardein products, we’re ready to start evaluating them!

At first glance, many people might assume that Gardein is quite healthy. After all, Gardein products tend to have very low (or zero) saturated fat and trans fat content. This is a big improvement over most meat.

However, there’s a lot more to it than that. Foods exists on a broad spectrum between “very unhealthy” and “very healthy.” So—is Gardein good for you or bad for you?

Well, it’s not necessarily at either extreme. It has some pros and cons.

Gardein is processed food. It is mainly made of processed flour, isolated protein, and refined oil, with added salt. Some Gardein products also contain added sugar.

To dig into the details of why Gardein counts as processed food, let’s look at the main ingredients in the Seven Grain Crispy Tenders: Enriched wheat flour, soy protein isolate, canola oil, and vital wheat gluten.

Here’s how we know these are all refined foods, not whole foods:

Further on in the ingredients list (after “Contains less than 2% of”), there are “Oats,” which would count as a whole food… but by far, most of the ingredients in these Crispy Tenders are processed.

Now, this doesn’t mean Gardein is as bad as Twinkies or fast food. Not all processed food is equally bad! These Crispy Tenders contain no added sugar, for instance. There’s also no trans fat, and the amount of sodium is pretty moderate at 220mg per serving.

So, Gardein’s Seven Grain Crispy Tenders are definitely processed food—but they’re not the worst processed food out there. Mainly, you’re getting a lot of processed flour and protein.

How about the other two products? Well, they both count as processed, too. Some factors to consider:

Is Gardein High in Sodium?

Most Gardein products are moderate or somewhat high in sodium, with around 200mg to 400mg of sodium per serving. A few Gardein products, including the soups and the plant-based jerky, contain much higher sodium levels yet.

I wanted to get a larger sample size to look at the amount of sodium found in Gardein products. So here are ten different Gardein products, with serving size and sodium:

Most of these are about what you’d expect for fake meats and other processed but somewhat health-oriented foods. They’re a bit high if you’re trying to limit your sodium, but most are not outrageous compared to other similar products on the market.

That said, I would point out two Gardein products that are outliers and have quite high sodium: the plant-based jerky and the soup:

I would certainly limit how much I ate of either of these foods, and try to only consume them in balance with a diet that is lower in sodium overall.

Is Gardein High in Protein?

That said, if you’re trying to build or maintain muscle mass while in a calorie deficit, I have personally found that high amounts of protein are useful. And for those and similar purposes, I’ve found it helpful to check the “protein density” of various foods.

Here is a list showing how Gardein compares to other meat replacements for protein per 100 calories:

And if you’re actually trying to put together a high protein vegan meal plan, there’s another problem you might bump into with Gardein…

Here’s the issue: Gardein’s jerky seems to have the most protein of all their products—but it also contains very high levels of sodium, as I covered above. This means you probably don’t want to load up with multiple servings on a regular basis.

So even though Gardein’s jerky has a solid amount of protein, you can’t really rely on it to be a staple source of a big chunk of your daily protein intake. If you did, you’d just consume way too much sodium in the process.

Is Gardein Good for Weight Loss?

Gardein is okay for weight loss, but it’s not as good as whole plant foods. Gardein products tend to be lower in fiber, higher in sodium, and higher in caloric density than vegetables, fruits, or beans. This means you will likely eat more calories of Gardein before feeling “full.”

Here are three factors that may make Gardein less-than-ideal for weight loss, when compared to whole plant foods:

So, when compared to natural, whole plant foods, Gardein doesn’t look great for weight loss. The processed ingredients will typically stimulate you to eat more calories before you feel full.

However, there are two big caveats I should mention: