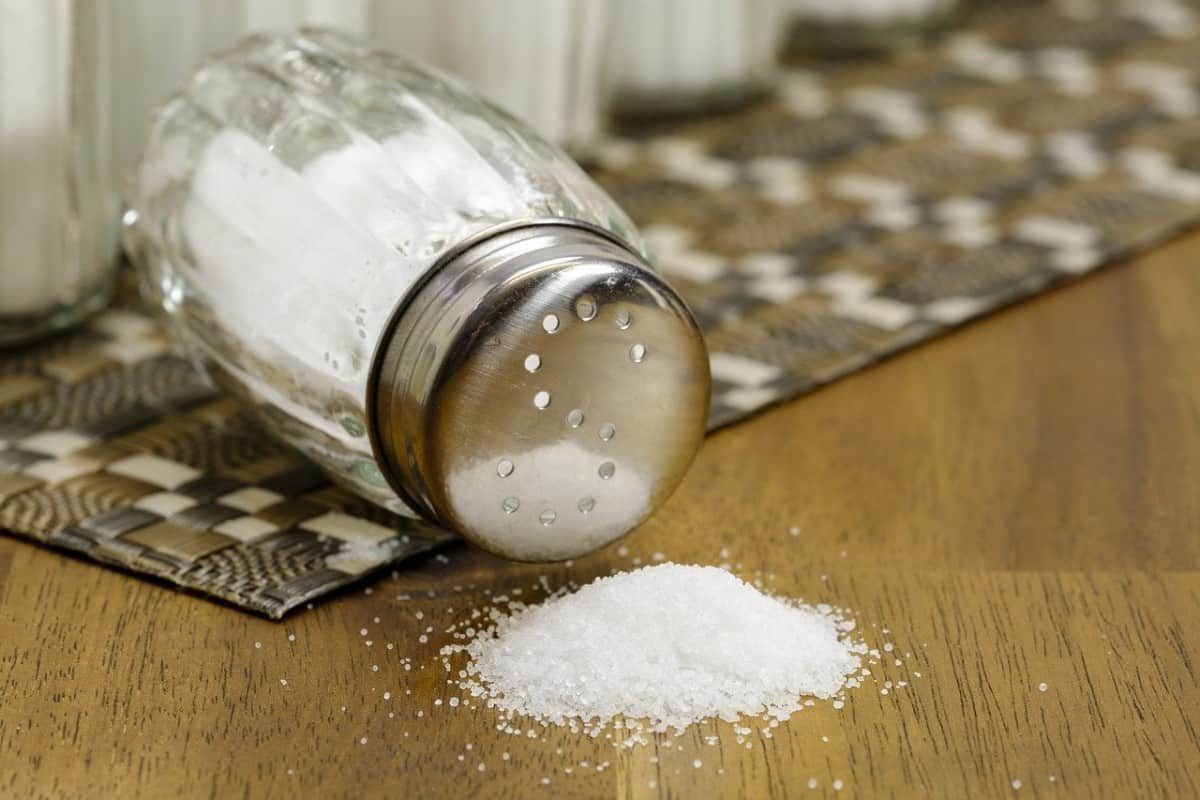 We’ve all experienced it… You get on the scale in the morning, and somehow, your weight is up 3 pounds from yesterday. Luckily, it’s not 3 pounds of fat you gained overnight. It’s likely water weight after a high-sodium meal. But how long will this sodium stay in your system?

Excess sodium from a high-salt meal typically takes 2 to 4 days to leave the body. This time can be decreased by drinking extra water, exercising, sweating, cutting back on salt, and eating fruits and vegetables high in potassium.

Below, I’ll share the fascinating explanation for why your body holds onto water with sodium—and how you can speed up the process of getting it out of your system.

How Long Does It Take for Salt to Leave Your Body?

Excess water weight from consuming a high-salt meal will usually last for 2 to 4 days. Most people find that their weight returns to normal within that time period.

To minimize the time it takes to flush out the excess sodium, see the 6 tips below.

The effects of salt on blood pressure can be a little less straight forward. Your long-term sodium consumption effects your blood pressure levels—not just the current water retention from a high-salt meal. (source)

Why Does Too Much Sodium Cause Water Retention?

Your body is a self-regulating system. It’s in a constant effort to maintain a specific chemical balance (“homeostasis”). And sodium concentrations are one part of that balance.

Your kidneys are the organs most responsible for regulating your sodium and water excretion. But your brain helps as well, managing the levels of hormones like ADH (anti-diuretic hormone).

The layman’s explanation behind water retention is that your body needs to dilute the excess sodium in your body. The goal, really, is to pee out the excess sodium. But until that’s taken care of, you just need extra water to balance with it.

Your brain also does things like make you thirsty after eating salt, which helps add to the water supply and restore balance.

Researchers found that, in response to current sodium levels, the kidneys not only modulate the amount of salt released in urine, but also the amount of urine you release overall.

Test subjects consuming higher amounts of sodium were actually found to urinate less because the kidneys were making an effort to hold onto extra water. (source)

How to Counteract Too Much Salt Intake

If you want to get rid of your salt bloat faster, here are some strategies you can use to help flush it out of your body a bit quicker.

Note: These are quick tactics that should work for a casual case of water retention after a salty meal. But if you’re having serious or chronic sodium issues, talk to your physician for professional advice.

Your body holds onto extra water with sodium in order to dilute it in your body. But the real goal is to release that salty water in your urine. In order for it to do that in a timely manner, you need to give your body more fresh water to replace it. (source)

You don’t need to go crazy with water, though. Most authorities recommend 2 to 3 liters of fluids per day. That should be plenty. Drinking way more than natural could cause issues like water intoxication.

2. Get Fluids from Food.

Along the same lines as drinking water, you can also hydrate with foods to help flush out salt. Did you know that most fruits and vegetables are composed of over 80% water? Many of them are over 90% water (source).

There’s also the option of drinking smoothies and other recipes containing water. (But I wouldn’t recommend most soups—even “reduced sodium” canned soups tend to have quite a lot of sodium!)

Many of these fruits and vegetables are especially good choices when you’ve got salt bloat, as they also fulfill the next recommendation…

Potassium is another electrolyte that you ideally want to eat in balance with sodium. But in our standard diets today, we get way too much sodium and not nearly enough potassium. (source)

Consuming some extra potassium can help you produce more urine, helping you excrete more of the sodium currently in your system. (source)

What are some high-potassium plant foods to focus on?

First, just moving around helps prevent water retention. People commonly experience fluid retention in their legs when they’re sitting through long flights. And the same happens with people who are bedridden. But exercise keeps things moving.

Second, excess sodium can be released from your body in your sweat. So a vigorous workout that works up a sweat can be beneficial. Also beneficial are things like saunas or steam rooms. (source)

Third, exercise can help to reduce inflammation in your body, which can actually decrease water retention, as well. (source)

5. Cut Back on Salt for a Few Days

If you overdid it on salt and you’re trying to get back to baseline, then don’t keep adding a bunch more salt to the party. Be conscious of your sodium intake for a few days.

Avoid canned and processed foods, salty snack foods, restaurant meals with salty sauces, and the like. Just a few days of this vigilance can help ensure that your salt bloat doesn’t last a whole lot longer than necessary.

This is actually one of the most effective steps you can take, as the average American diet contains thousands of extra milligrams of sodium per day. This dwarfs the amount of sodium you can lose in an hour of sweating. See below for more.

Being extra-conscious of your salt intake for a few days is good practice anyway. Most Americans consume more than double the recommended intake of salt, and it can lead to high blood pressure (a heart disease risk factor) for many.

These nutrients are not cited quite as often as a mandatory part of a sodium-eliminating routine. But there is good evidence and logic behind each of them—so if you feel dedicated, then this is where I’d look next:

What to Avoid When Removing Sodium From Your System

Just a few quick notes on 3 things to avoid if you’re trying to flush your excess sodium quickly:

Does Sweating Really Get Rid of Sodium?

Sweat does contain sodium, so yes, sweating does remove sodium from your body… However, you should not expect the biggest decreases in your body’s sodium levels from sweating alone.

Athletes exercising competitively in the heat are estimated to lose 350 mg of salt in 30 minutes. (source).

Certainly, that can add up if you’re exercising for hours. But some high-salt meals from restaurants contain thousands of milligrams of excess salt.

Likewise, even the routine daily sodium consumption for most Americans is something like 3,500 mg per day. That’s without the rogue “high-salt meal” in the mix.

So if you want to really impact your sodium levels quickly, it may do more to cut your sodium consumption levels, rather than adding an hour of sweating into your routine.