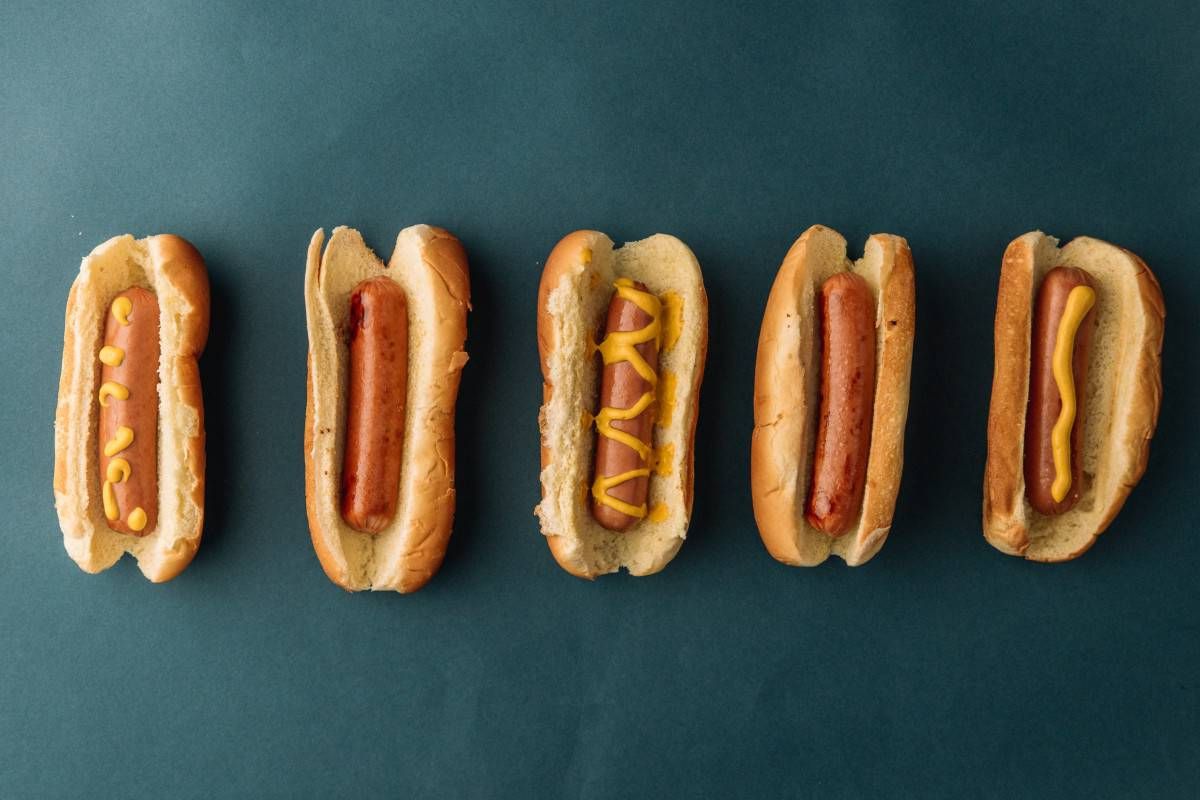 With all the vegan health and weight loss transformations you see out there, some people assume all vegan food is healthy. But what about fake meats like vegan hot dogs? Are vegan hot dogs actually healthy?

What Are Vegan Hot Dogs Made Out Of?

For most vegan hot dogs, the main two ingredients are (1) plant protein and (2) vegetable oil.

Each brand also has a mix of ingredients added for flavor, color, and texture. These commonly include: Salt, cane sugar, carrageenan, natural smoke flavor, xanthan gum, and paprika oleoresin.

Here are the full ingredients for three leading brands of vegan hot dogs in the United States:

Before we move onto the rest of the Nutrition Facts label, let’s answer some questions about the ingredients and substances found in vegan hot dogs.

Do Vegan Hot Dogs Have Nitrates?

Regular hot dogs are known for containing “nitrates” (actually nitrites) that are thought to lead to the formation of carcinogens. Most famously, this includes “sodium nitrite.” It’s a preservative used to keep hot dogs pink in color.

It turns out these nitrite preservatives, when cooked in meat, can form nitrosamines, which are powerful carcinogens, particularly for pregnant women and children. (Hot dogs have been associated with childhood leukemia and pediatric brain tumors.)

So, do vegan hot dogs have any of these potentially dangerous preservatives?

Vegan hot dogs do not contain nitrite preservatives. And even if they did, it’s not necessarily the case that this would result in the same carcinogenic nitrosamines that commonly form when cooking processed meat like real hot dogs.

So there’s nothing to worry about. Indeed, one vegan hot dog brand, Yves, answers this question clearly on their website’s FAQ: “We do not use any nitrites or any artificial preservatives in our products.”

Should I Worry About Carrageenan in Vegan Hot Dogs?

Carrageenan is an ingredient found in many (but not all) vegan hot dogs. It’s a thickener and fat substitute made from a type of red moss. And some evidence suggests that it may cause digestive issues and lead to leaky gut.

However, these concerns with carrageenan are mainly based on in vitro studies (in a petri dish). We still lack sufficient evidence to know how carrageenan really works in our bodies.

So, should you be concerned about the carrageenan in vegan hot dogs? Well, there’s some cause for concern—but it’s far from proven that carrageenan is harmful in actual human physiology.

Personally, I would consider carrageenan to be a negative ingredient, due to its potential risk. But I wouldn’t consider it on the same level as food compounds that we know to be awful for human health. It’s more of a question mark.

I’m not sure exactly what qualifies as “highly processed,” but vegan hot dogs are definitely processed. When we talk about “processed food,” we’re really talking about the removal of healthy parts of a food, or the addition of unhealthy parts.

So, how do vegan hot dogs stack up in that regard?

These are four significant ways that vegan hot dogs qualify as “processed” or even potentially “heavily processed food.” That said, they are not the most processed junk food out there.

Vegan hot dogs are actually quite low in sugar, and certain brands (like Lightlife’s Smart Dogs) are impressively low in calories (50 calories per link). So it’s not like vegan hot dogs are among the most processed foods or anything.

We need to look at how vegan hot dogs compare to regular hot dogs specifically.

We’ll be looking at a few different factors, but let’s start by looking at the nutrition facts for three vegan hot dogs (the same ones listed above), compared with three “real” hot dogs.

Here are the full names of the products I’m comparing and where I grabbed the nutrition facts from:

Let’s take a look at how they compare. The vegan dogs are on the right:

Here are some of the interesting things I noticed from this table:

Based on this comparison, vegan hot dogs clearly win. However, that doesn’t address everything. There’s something else, which isn’t visible in the ingredients list or nutrition label…

Remarkably, in 2015 the World Health Organization explicitly stated that regular hot dogs are carcinogenic. Hot dogs and other “processed meats” (like bacon) were categorized as Group 1 carcinogens.

“Group 1” is the group of carcinogens for which there is the strongest evidence for cancer risk. This is the same category that includes asbestos and smoking. (source)

This is pretty shocking for a lot of people to hear. Many parents don’t realize they’re feeding their children known carcinogens when they make hot dogs.

Arguably, then, the title “Group 1 carcinogen” shouldn’t necessarily scare us off. We should look at the actually data for how large the increased risk of cancer is. So let’s do that.

But that’s not all. One study showed that eating only 20 grams of processed meat (less than half of a hot dog) per day raised breast cancer risk in women by 21%.

Some people may find these risks unacceptable. Others may find them no big deal. But the fact is that regular hot dogs do raise your risk of cancer.

So what about vegan hot dogs? Do they increase cancer risk, too?

This doesn’t mean vegan hot dogs are perfectly healthy. As I covered above, vegan hot dogs are usually made from processed ingredients, so they’re mostly empty calories. Their high salt content and low fiber may contribute to weight gain or high blood pressure in the long run.

But unlike regular hot dogs, vegan hot dogs are not known to cause cancer.

Many people are fine with eating an unhealthy meal once in a while. Even healthy vegans may choose to have occasional cheat meals full of processed foods like vegan hot dogs. But what if you’re looking for a truly healthy option?

What can you eat in place of hot dogs that is actually healthy? Well, I have a pretty cool recommendation: Carrot dogs.

It’s just what the name sounds like—carrots that are seasoned and grilled like hot dogs, eaten in a bun. It’s kind of funny, but it’s actually surprisingly good.

I’ll be honest that I haven’t vetted all the different recipes out there or perfected my own yet. Here is one that looks like it has promise. But honestly, the first time I had a carrot dog, it was an extremely simple version of it.

Basically, one of my friends just grilled plain carrots on a real grill, and she got them all charred like real hot dogs. Honestly, just the shape and the grilled/charred taste was enough to make the carrot seem like a hot dog.

Combine the grilling/charring effect with a proper marinade, and you can truly make some incredible carrot dogs. Carrots are way healthier than any of the common vegan hot dogs (or real hot dogs) on the market today. Dig in!