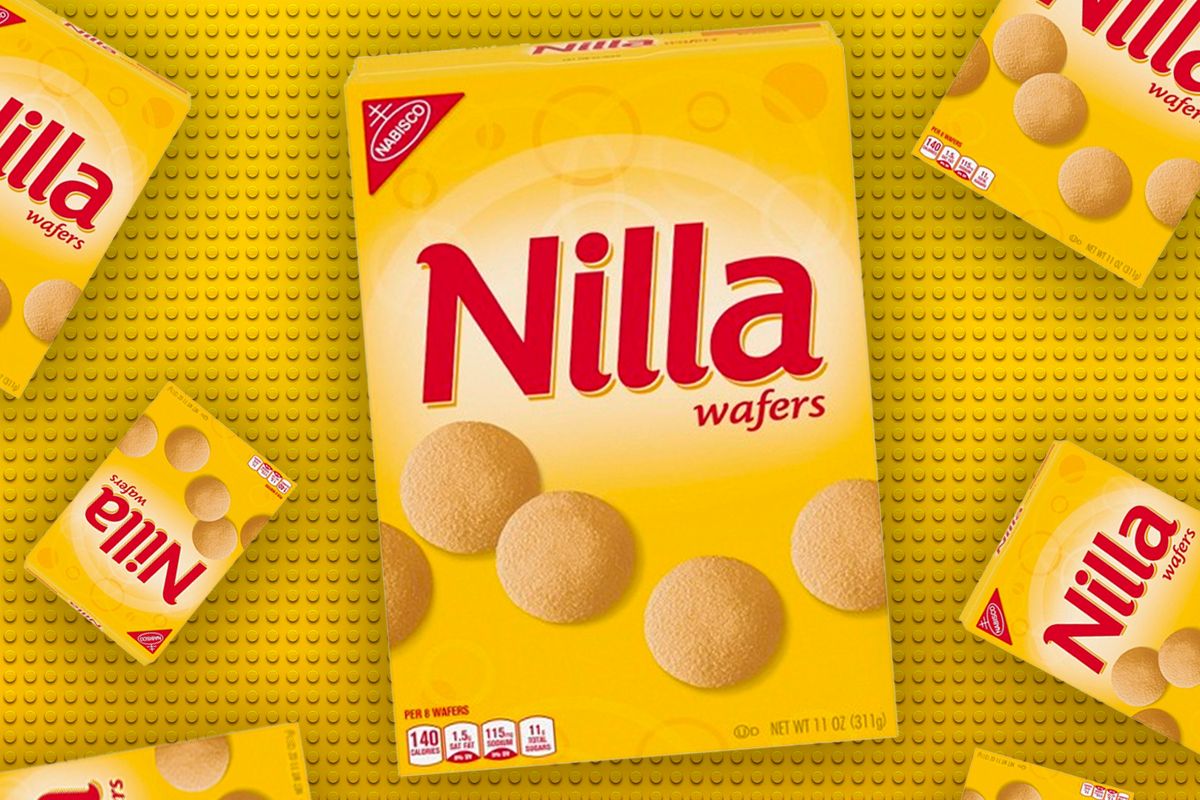 The word “wafer” sounds kind of light and airy… But if you want to keep your own body feeling light and energetic, then Nilla Wafers may not be the best snack. And that’s what we’re going to cover today: How bad are Nilla Wafers, really?

Nilla Wafers are not very healthy, as the main ingredients are processed flour, sugar, and oil. Nilla Wafers have 11g of sugar per serving, which is about 44% of the American Heart Association’s daily sugar limit for women and 31% for men. Nilla Wafers are also low in protein and fiber.

Below, we’ll analyze Nilla Wafers ingredients and sugar content, and we’ll explore whether they cause weight gain. We’ll see how they compare to Oreos and Chips Ahoy, whether they may be bad for your skin, and more.

Are Nilla Wafers Bad for You?

Below are the 11 questions I’ve answered about Nilla Wafers nutrition. Click to skip to any section, or keep reading for the full analysis:

1. What Are Nilla Wafers Made Of?

Let’s start by looking at the ingredients for Nilla Wafers:

Overall, the main ingredients in Nilla Wafers are processed flour, sugar, and oil. This is not really a recipe for a healthful snack. However, let’s dig deeper into the details.

The sugar is probably the worst aspect of Nilla Wafers nutritionally, so we’ll look more closely at that next.

2. Are Nilla Wafers High in Sugar?

Nilla Wafers have around 11g of total sugar per serving, or about 1.4 grams of sugar per wafer. This is relatively high sugar content. In comparison, OREOs have more sugar (4.7g of sugar per cookie), while animal crackers have less sugar (0.5g of sugar per cracker).

The American Heart Association recommends a daily sugar limit of 25g for women or 36g for men. So, two or three servings of Nilla Wafers would use up most of your daily sugar intake.

Any amount of added sugar should likely be viewed as a negative, as it is not needed for health, and it’s taking up space in your diet that could be filled with more nutritious foods.

Another thing to consider is the processed flour in Nilla Wafers. Such refined flours are high on the glycemic index. That means it can quickly turn into sugar in your body, and it can contribute to blood-sugar spikes, even though it’s not listed as “sugar” on the label.

3. Do Nilla Wafers Make You Fat?

Nilla Wafers could potentially lead to weight gain, as they have several high-calorie ingredients like sugar, enriched flour, and vegetable oil. They are also low in protein and fiber, so they may be less filling than other snacks. However, Nilla Wafers can be eaten in moderation on a weight-loss diet.

Remember: The most important thing for weight loss is your total calorie balance. And if you want to make weight loss easier, the best things to eat are foods with a low calorie density.

Low-calorie-density foods are typically high in fiber and water. Think vegetables, fruits, whole grains, and beans. They fill up your stomach and help you feel full on fewer calories. (Protein also helps you feel more full.)

Nilla Wafers are basically the opposite. They are full of calorically dense ingredients like refined flour, sugar, and oil. However, it is still possible to lose weight while eating some Nilla Wafers.

Eating a few Nilla Wafers will not automatically make you fat. But eating a whole box every day might. It’s all about the big picture.

In general, one food will not make or break your diet. Portion sizes and total calorie balance are some of the most important factors when trying to lose weight.

4. How Much Exercise Does It Take to Burn Off Nilla Wafers?

To burn off the calories from one Nilla Wafer (around 18 calories), most people would need to run or walk about 0.2 miles or 0.3 kilometers.

There’s a general rule of thumb that you can burn about 100 calories from each mile you run. That rule actually applies whether you are running fast or slow—and even if you’re walking. It’s been tested, and it generally holds true. (source)

Each Nilla Wafer has 18 calories, so that’s about 0.18 miles to burn off a Nilla Wafer. Alternatively, you could also jump on a trampoline for 5 minutes, jump rope for 2 minutes, or do kettlebell swings for 1 minute. (source)

Nilla Wafers have 0 grams of dietary fiber per serving. This makes Nilla Wafers a low-fiber snack. In my opinion, this is one of the big failings of Nilla Wafers.

Most people don’t eat enough fiber, and it’s a big key to improving your nutrition. Low-fiber snacks often spike blood sugar more and fill you up less, potentially leading to overeating. And if your diet is low in fiber overall, that can lead to more problems.

That said, if you’re trying to eat a low-fiber diet for any specific reason, then this could be a plus.

6. Are Nilla Wafers High in Sodium?

Most Nilla Wafers flavors have 115mg of sodium per serving of 8 wafers. This is a pretty normal amount of sodium for a serving cookies. Chips Ahoy and Oreos have around the same sodium content per serving.

For reference: The American Heart Association recommends limiting sodium to 2,300mg per day, but they are “moving toward an ideal limit” of 1,500mg per day. That would still be 13 servings Nilla Wafers (about 104 wafers). So, Nilla Wafers are not that bad when it comes to sodium.

7. Can Nilla Wafers Cause Acne?

Our understanding of the relationship between diet and acne is still evolving. But increasingly, there is significant evidence that diet does play a big role in acne. And there are a couple foods that are widely acknowledged as problematic.

The first big problem food for acne is dairy: Milk, cheese, ice cream, and so on.

But the second acne problem food is definitely relevant to Nilla Wafers: Sugar. As covered above, Nilla Wafers have a fair amount of sugar in each serving (11 grams). Plus they have more processed carbs from the flour, which may contribute to acne, too.

Milk and sugar are suspected to affect acne through similar mechanisms. It has to do with your body’s insulin response. Your body’s use of insulin is affected by eating dairy foods and also by spikes in your blood sugar from high-glycemic carbs. (source)

Interestingly, this means that for many people with acne, reducing acne is about stabilizing your blood-sugar levels. And often, that means cutting out high-GI carbs like those in Nilla Wafers—or at least minimizing them.

So, are Nilla Wafers bad for your skin? Do Nilla Wafers cause pimples? Well, for many people, yes, they may. But acne science is still a developing field. If you want to learn more, I wrote more about how to potentially clear your acne in this blog post.

8. What Happens if You Eat Nilla Wafers Every Day?

How Nilla Wafers affect your body will depend on your overall diet. If you only eat a couple of Nilla Wafers daily—and if your lifestyle is healthy overall—then you likely won’t face any bad consequences.

However, if you eat big portions of Nilla Wafers—and if your overall diet and lifestyle is unhealthy—that could cause bad consequences in the long-term. What kind of specific issues?

Eating Nilla Wafers will likely spike your blood-sugar levels. Blood sugar spikes can have many negative short- and long-term effects. These can potentially include:

Also, Nilla Wafers may lead you to eat excess calories. Since they are a delicious food with a high calorie-density, they are easy to overeat. And if you overeat calories too often, you could have weight gain and associated health issues.

If your diet is consistently high in sugar, that comes with documented risks, as well. High-sugar diets are observed to raise blood-sugar levels, triglycerides, blood pressure, heart disease risk, and obesity risk. (source)

So, is it bad to eat Nilla Wafers every day? It depends on your overall diet. Eating a couple of Nilla Wafers per day is probably fine for most people. But eating a large plate or box of them every day is certainly not very healthy.

9. Are Nilla Wafers Bad for Your Heart?

Nilla Wafers could be bad for your heart if eaten as part of a high-sugar diet. High-sugar diets have been shown to raise blood sugar levels, triglycerides, blood pressure, heart disease risk, and obesity risk. (source)

The American Heart Association recommends a limit of 25g of sugar per day for women and 36g per day for men. It would only take around 3 servings of Nilla Wafers to reach those limits, and that’s if you’re not even consuming any other sugar all day long.

When looking at foods for muscle building and bodybuilding, the two main things people discuss are usually calories and protein. How do Nilla Wafers stack up in these areas?

Nilla Wafers are not a great snack when cutting, since they have a lot of calories without providing much satiation, and they do not have much protein. But Nilla Wafers may be fine if you’re bulking, since they can help you consume more calories, and it’s generally ok to eat a lower protein diet (by percentage) during a bulk.

Obviously, eating one or two wafers could be fine even during a cut—but the point is that Nilla Wafers are mostly just going to use up your calories, without providing as much protein or satiation that healthier foods would.