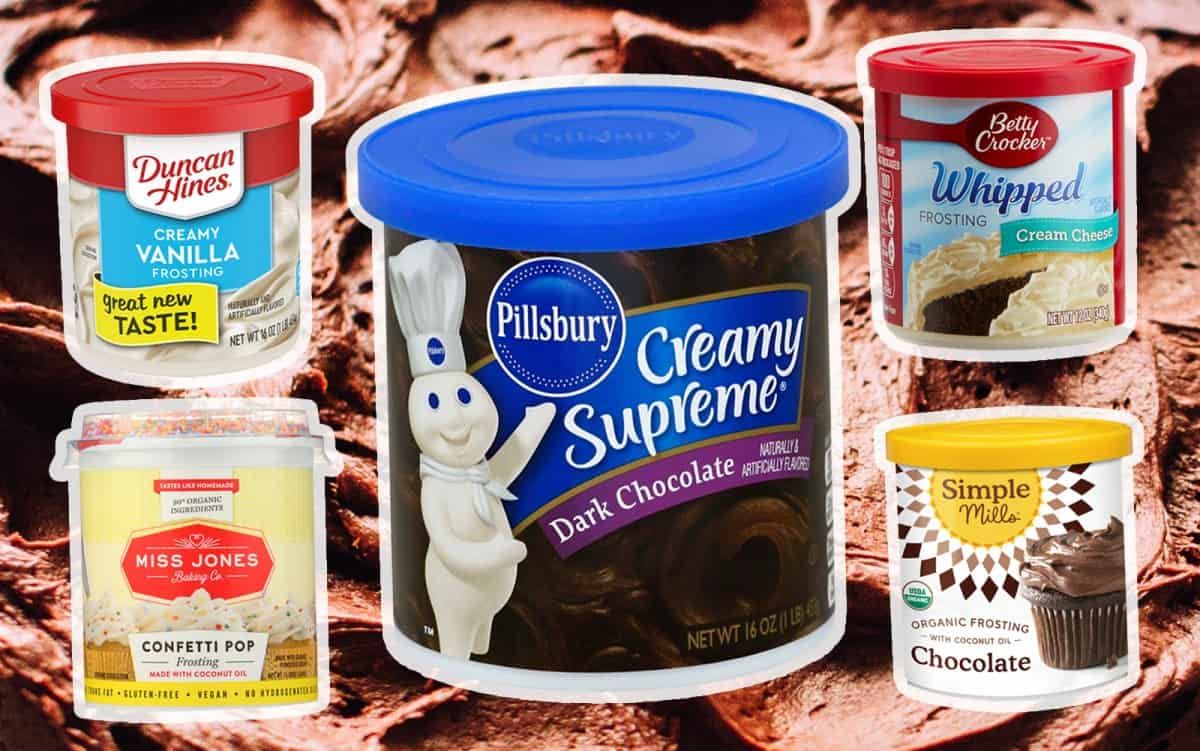 As a young vegan, I used to buy frosting from the store and just dip Ritz crackers in it. In recent years, I’ve cleaned up my diet quite a bit… But frosting still has a special place in my heart. And it’s amazing that most people don’t realize how often it’s vegan.

For this blog post, I decided to do some original research. I went and checked the ingredients for 88 store-bought frosting products—just to see how many are vegan. Can you guess the results?

My study showed that most store-bought frosting is vegan. Out of 88 frosting products checked, 58 products (66%) were vegan. The most common animal ingredients found were dairy and confectioner’s glaze (in Funfetti frosting). One frosting product also contained egg.

These results would probably surprise a lot of people! In fact, while doing some preliminary research for this post, I found a blog post that specifically said most store-bought frosting contains butter. However, that is decisively not true. And I’ll prove it!

Does Frosting Have Dairy?

This was a very interesting result because most people assume that frosting contains butter. But while it is common for homemade frosting to contain butter, it is not common at all for store-bought frosting to have butter.

There are even multiple examples I found of store-bought frosting products with flavor names like “Milk Chocolate” and “Butter Cream” that are actually dairy-free and vegan (!).

In fact, the following frostings are all (surprisingly) vegan and dairy-free, despite their names:

Note: I’m not saying that all “Milk Chocolate” or “Buttercream” frostings are vegan. Certainly, a few of them actually do contain dairy. Check the full tables below for details.

Does Frosting Have Eggs?

Store-bought frosting rarely contains eggs. Out of 88 frosting products I checked, only 1 contained eggs: Betty Crocker’s Coconut Pecan Rich & Creamy Frosting. It is much more common for frosting to contain dairy or the insect-based “confectioner’s glaze,” rather than eggs.

Does Frosting Have Gelatin?

Store-bought frosting does not typically contain gelatin. Out of 88 frosting products I checked, none contained gelatin.

What Is Confectioner’s Glaze?

The animal ingredient that showed up a lot more than expected in my research was confectioner’s glaze. This ingredient is sometimes called “shellac” or “lac resin” instead. It’s actually a product made by lac beetles. So it’s an insect product.

Personally, I only really worry about the dairy, eggs, and confectioner’s glaze in frosting as a vegan. However, some vegans have a more strict view than I do. So I wanted to address some of the “iffy” ingredients found in frosting, too:

And if you wanted to get even pickier, you’ll also find ingredients like mono- and diglycerides, which the Vegetarian Resource Group (VRG) reports as being “Typically Vegan” (but not always).

My view with all these ingredients is that boycotting them will not do much to help the animals, but it will make veganism much harder. So my advice for new vegans is to just focus on the main ingredients that we know are animal based. Cut those out, and call it good.

If you want to do more for animals after cutting out the main animal ingredients, then I recommend donating or volunteering with a vegan org such as Vegan Outreach. That will make a bigger impact than obsessing over tiny ingredients that are only possibly tied to animals.

For a longer explanation of my view on this issue, see my blog post on why I don’t worry about the vitamin D3 in cereal.

What Is Vegan Frosting Made Of?

Some people are confused about what vegan frosting would contain. If not butter, then what makes it so creamy and good?

Really, frosting is mainly going to be sugar and fat. And the majority of the calories usually come from the sugar, rather than the fat. So really, the top ingredient in most frosting is sugar or some form of sweetener.

Which Store-Bought Frosting Is Vegan?

To make sure this post was based on real-life data, I checked 88 store-bought frosting products to see which ones were vegan. Here are the full findings for each of the brands:

Here is the full breakdown of which flavors of Betty Crocker frosting are vegan:

Here is the full breakdown of which Duncan Hines frosting products are vegan:

Miss Jones frosting is confirmed vegan. All five flavors are 100% plant-based, containing no dairy, egg, gelatin, or other animal ingredients.

Here are the exact products I was able to check:

Pillsbury has a ton of frosting products—more than any other brand I checked—so I’ve split them into separate tables by product line.

Here is the breakdown for Pillsbury Creamy Supreme Frosting:

Here is the breakdown for Pillsbury Funfetti Frosting:

Here is the breakdown for Pillsbury Fluffy Frost:

Here is the breakdown for Pillsbury Sugar-Free Frosting:

Here is the breakdown for Pillsbury Filled Pastry Bags:

Simple Mills frosting is confirmed vegan. Both the vanilla and the chocolate flavor are 100% plant-based, containing no dairy, egg, gelatin, or other animal ingredients.

Again, here are the exact products I was able to check: